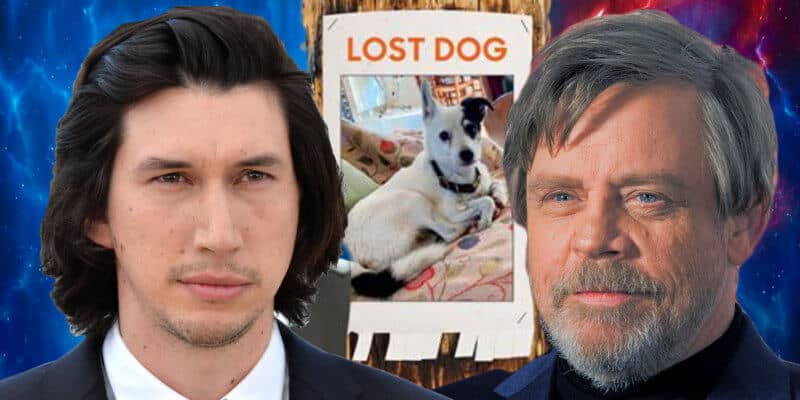 “Star Wars” star Adam Driver took time off from shooting the Amazon musical “Annette” to help find the film director’s dog, who went missing from the set. In his pursuits to find the pooch, he recruited his “Star Wars” co-star Mark Hamill.

Driver is currently in Belgium shooting a musical with Marion Cotillard about a stand-up comedian and his opera singer wife. All was going well on set until director Leos Carax’s 9-year-old black-and-white dog, Javelot, went missing. “Everyone was distraught,” Driver, 35, says. “I have a dog. And sets mold into family really quickly, and that extends to their family as well.”

In an attempt to spread the word as quickly as possible about the missing dog, Driver shot a video in which the actor promised rewards to anyone who could help them recover the lost dog. “We will put you in the movie. We’ll give you chocolate. We’ll christen your child. We’ll do anything as a way of saying thank you” Driver promised in the video.

As one might imagine, Driver has quite the following on his own. However, desperate times cause for desperate measures–so Driver reached out to his intergalactic co-star Mark Hamill and asked him to tweet the video to his followers on social media.

According to The Hollywood Reporter, the video was viewed over 800,000 times. And from this viral clip, someone was able to spot the dog at a train station, which led to the reunion of Carax and his beloved dog Javelot.

As happy as an ending Carax got with his dog Javelot, it is not yet known how things will go for the final film in the current “Star Wars” trilogy, which is set to star both Mark Hamill and Adam Driver. “Star Wars: The Rise of Skywalker” premieres in December and we’re still eagerly awaiting another trailer to give more insight into the epic conclusion film.

The only released synopsis of the film states:

A year after the events of The Last Jedi, the remnants of the Resistance face the First Order once again—while reckoning with the past and their own inner turmoil. Meanwhile, the ancient conflict between the Jedi and the Sith reaches its climax, altogether bringing the Skywalker saga to a definitive end.

Will you be heading to theaters in December to see “Star Wars: The Rise of Skywalker” finale? Let us know in the comments below!