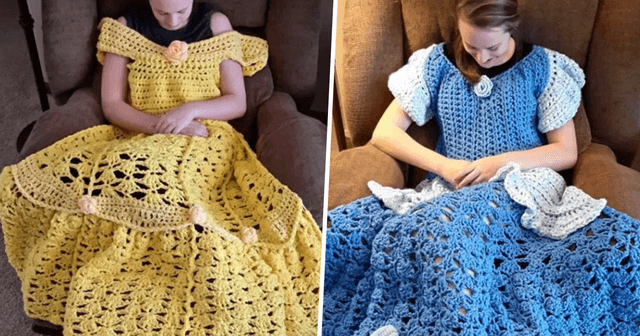 As enchanting as it is to fall into a deep slumber every night–it’s not to say it can’t be done without the grace and elegance of a Disney Princess. And now, thanks to this woman’s magical designs, you can now catch some Z’s in this same style while staying warm thanks to these blankets created to look exactly like some of your favorite Disney Princesses’ iconic dresses!

Carol Hladik, the Etsy designer responsible for these fairytale designs, is most known as a home-school teacher and full-time mom from Wichita, Kansas who enjoyed crocheting as a hobby. However, after she had some extra downtime due to surgery on her foot, Hladik decided to dedicate more time to her craft and the results produced a happily ever after.

Her first design was the Raverly – the Brandi Cardigan, which was received quite well on a craft website. From this success, the mother and designer decided to think more outside the box and more along the lines of classic animated Disney films.

“I love blankets, and thought it would be fun to make one that looked like a princess dress. The first one was the Yellow blanket. I was overwhelmed with the response and requests for other designs,” she shared.

And with these requests came an abundance of other Disney Princesses, including Cinderella, Rapunzel, and Sleep Beauty.

As more and more became aware of Hladik’s talents, some asked her to move away from her Disney Princess roots and to move into villains and other Disney characters. This lead to the creation of Spider-Man, Sorcerer Mickey, The Incredible Hulk, and Maleficent blankets!

As Hladik’s fame and customer base has grown, the designer has become quite busy and almost overwhelmed with the amount of requests coming her way. “I have been working pretty much non-stop since February to come up with other designs and add sizes to the current ones. I hope to be able to add other items to my shops soon,” said Hladik.

For those of you who are going to click off this article and immediately look up Hladik’s Etsy shop, it’s worth noting that Hladik won’t create the entire blanket for you on her own. Instead, her store sells the patterns that you need to create them. So if you want one of these for yourself, you’ll have to crochet it all on your own!

A few of the other Disney Princess dress designs on Hladik’s site, including Mulan, Merida, and Aurora.

To get one of these epic Disney Princess and other character blanket designs, be sure to head over to Hladik’s official Etsy Store.

What are your thoughts on these spellbinding Disney Princess dress blankets? Let us know in the comments!