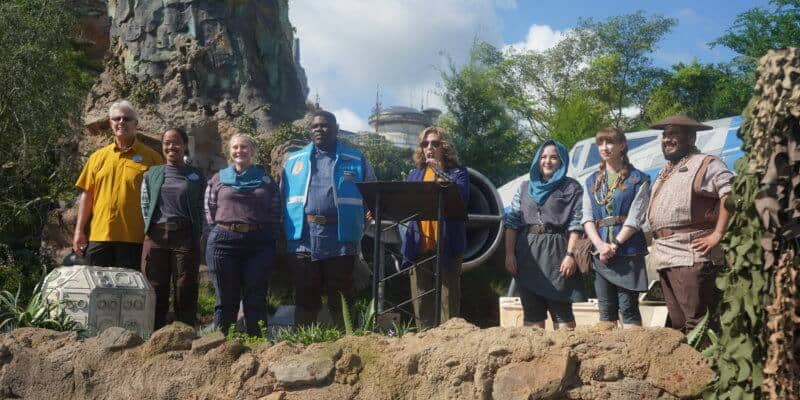 Star Wars: Galaxy’s Edge is only weeks away from opening at Walt Disney World and in the midst of the intergalactic land’s arrival, Disney has revealed the significant economic impact the new land has had on Central Florida.

This morning at Disney’s Hollywood Studios, the company held a special press conference discussing the land’s contribution to the community. Senior Vice President of Walt Disney World Parks, Maribeth Bisienere lead the event. In her speech, she revealed the otherworldly project has contributed more than 7,000 jobs to Central Florida since its beginning. Of this, 5,500 coming from local trade, artisan, and construction roles and 1,700 direct permeant positions, which included leadership positions, entertainment performers, attractions engineers, and entry-level food and beverage, and merchandise hosts and hostesses.

Of the 5,500 workers that helped facilitate the construction of the project, it’s unknown if any of these employee’s services will be retained to continue ongoing support for the land.

With any theme park expansion, it goes without saying the company will hire employees within its own company. However, the idea that Disney was able to reach out to the local community for some of the land’s work is a positive to Central Florida as it allowed for both small and large Florida-based companies to benefit in the process.

Phil Holmes, Disney’s Hollywood Studios Vice President spoke on the local talent the company utilized when creating the land, saying: “Literally thousands and thousands of artisans and craftsman. A large portion of them do come from Central Florida or Florida…We’re really pleased with the amount of folks that live right here in Central Florida when it comes to the level of quality and talent of the artisans who are able to do things like this.”

Holmes revealed with the hiring of the 1,700 permanent positions, it was a mix of new and existing employees. “It’s always a blend. Part of what we enjoy doing is making sure opportunities are available to everybody who might be interested. Certainly, there are plenty of people who came from outside of the company who are just joining us but also people inside that would love to have a new experience,” said Holmes.

As part of the day’s celebration of Galaxy’s Edge and Central Florida, Walt Disney World partnered with Boys & Girls Club and gifted more than 1,000 local students from the organization the opportunity to be among the first to experience the new land at Disney’s Hollywood Studios. And of course, to ride Millennium Falcon: Smugglers Run.

“I feel really excited and honored to be able to go this attraction before anyone else has. Especially to be able to do it with my Boys & Girls Club family–I love them to death,” said Serenity Gary, a child from the organization.

As part of the company’s long-standing partnership with the Boys & Girls Club, the company has made it a goal to inspire young ones and to educate them of the many opportunities available in the STEM field. In addition to helping them identify opportunities within the vast majority of other career fields for their futures.

“Looking at all the workers here. I like hospitality, it really clicks in my mind to make me think I can do this…It’s an actual career. People are enjoying it and guests are coming to Disney and they’re putting smiles on people’s faces and I think that’s cool,” said Gary.

Comments Off on Galaxy’s Edge brought more than 7,000 jobs to Central Florida