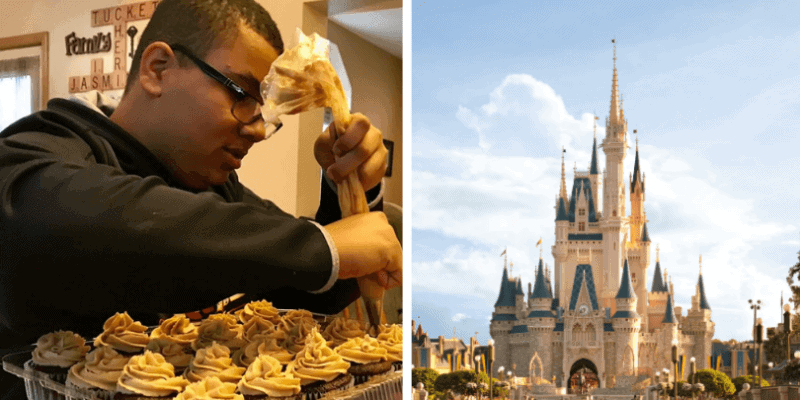 A Minnesota teenager made his family’s vacation dreams come true by baking and selling enough cupcakes to afford a trip to Walt Disney World.

Isaiah Tuckett of Madison, Minnesota, spent one-year baking and selling approximately 3,500 cupcakes to raise around $5,000, enough money to bring himself, his mother, father, sister, brother, sister-in-law, nephew, and uncle to Walt Disney World, the Most Magical Place on Earth. Tuckett has been baking since he was 7 years old, and the trip was also a celebration of his 14th birthday back on November 28, 2018.

In the past, Tuckett had asked his parents to go on a Disney vacation, but like many parents, Tuckett’s would say “no” or tell him to ask a different time. Disney vacations can be expensive, especially for large groups, but Tuckett took matters into his own hands and found a way to make enough money to have a magical vacation with his whole family.

“When I was growing up, I always liked being in the kitchen, and I made them for my grandma’s 85th birthday,” Tuckett said. “And then people really liked them, and they just asked if they could order them.”

For a year, Tuckett baked cupcakes for birthday parties, baby showers, graduations, weddings, funerals, and even high school prom. In 2018, he baked 750 cupcakes for three graduations.

“It was something I always enjoyed and I thought would be a good way to raise money for the trip to Disney,” he said.

Tuckett’s mother, Cheri, noted that her son has always had an interest in baking and helping out in the kitchen. He always wanted to go on a Disney vacation, so once people began ordering his cupcakes, Cheri and her son had a conversation about how they could make the vacation actually come to life. “I said, ‘you know what, if that’s something that you want to do, we would be willing to buy all the ingredients and so that everything that you earn…your profits, could be put into a savings account to earn that trip,'” Cheri Tuckett said.

At only 14 years old Tuckett is an example to Disney fans and people of all ages who have a goal in mind, be it the goal of taking a Disney vacation or anything else they want to achieve. Just as Tuckett shows us, if you truly want to achieve something and you do everything you can to reach your goal, you may actually end up achieving what you set your mind to. As for Tuckett himself, he shared that his next goal is to save enough money to purchase a blue pickup truck so he can deliver his cupcakes to customers and move his baking business forward. Way to go!