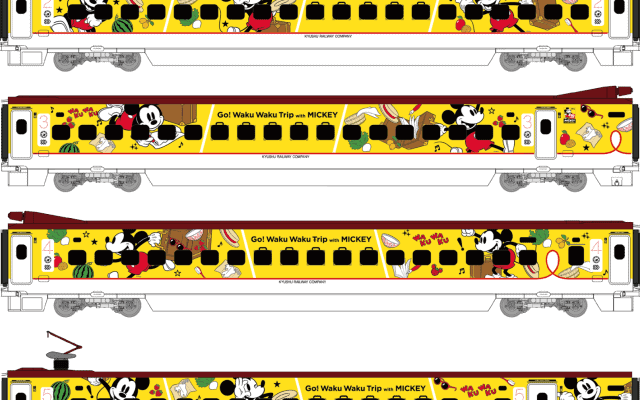 All aboard the Mickey Mouse train! Japan’s Shinkansen bullet trains are getting their first Disney-inspired makeover starting next month.

The country’s high-speed trains occasionally pay tribute to popular Japanse animation, such as Hello Kitty and Evangelion. But this time, our favorite mouse is taking over the train just in time for summer travel. According to SoraNews24, “Each of the train’s six cars is decorated with illustrations of the Disney mascot enjoying a summertime trip, with localized touches such as a Japanese-style watermelon and a traditional bathing basin and washcloth to be used in an onsen hot spring.”

Inside the train, each seat features artwork of Mickey ears on a straw hat, the perfect accessory for sunny summer days.

There’s also some adorable limited-edition merchandise available onboard the train, at station stops, and at shopping centers adjacent to the train stations. The collection of pouches, notebooks, pins, and more feature the “Go! Waku Waku Trip with Mickey” artwork (waku waku translates to exciting).

Despite the Disney theme, this train won’t take passengers to Tokyo Disney Resort. Instead, the Mickey Shinkansen will transport travelers around the island of Kyushu in southwestern Japan. The train is operated by Japan Railways Kyushu and runs on the Kagoshima route, “which connects Hakata Station (located in Fukuoka, Kyushu’s largest city) with Kagoshima Chuo Station, at the southern end of the island, passing through Kumamoto along the way,” says SoraNews24.

If you’re in Japan this summer, this fun Disney-inspired train goes into operation on May 17. It’s not clear how long the Mickey train will be running, but based on the summer-themed artwork, it will likely be in operation through August. Now, if only it could make its way to the United States, too!