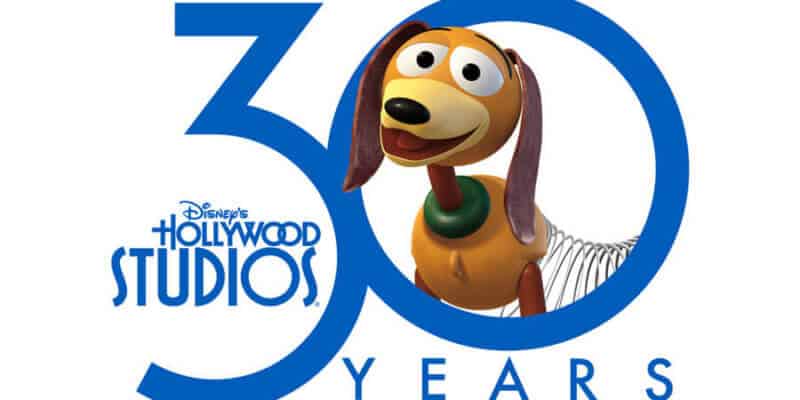 Disney’s Hollywood Studios 30th anniversary takes place on May 1, 2019, and this week Disney shared details on some of the ways guests can celebrate at the park.

Upon entering the park, be sure to pick up a special 30th anniversary commemorative guide map and button! Then, starting at 10:00 AM, Disney’s Hollywood Studios 30th Anniversary Star-Studded Celebration cavalcade starring Mickey and friends will make its way down Hollywood Blvd.

Head over to Grand Park (the home of Muppet*Vision 3D) to pick up special anniversary merchandise. Items are available while supplies last and include a new adult t-shirt, baseball cap, MagicBand, Tervis 24-oz tumbler, ornament, and more. Annual Passholders can also shop for exclusive merchandise. Note: All guests visiting Disney’s Hollywood Studios on May 1 will have the opportunity to purchase 30th anniversary merchandise in Grand Park as early as 8 a.m., one hour prior to park opening.

And here’s a peek at the Passholder-exclusive items:

Special anniversary food and beverage items will be available throughout the park. Look for Kylo Ren cupcakes, Incredibles Macarons, Tres Leches Verrine, and more tasty treats to celebrate the occasion.

The new Wonderful World of Animation projection show makes its debut on May 1. “Watch in wonder as the façade of the Chinese Theatre is magically transformed – displaying this stirring tribute to animation. Behold spectacular sequences celebrating themes like magic, family, adventure, romance and friendship. Each theme is brought to life through unforgettable moments from beloved films—like “Sleeping Beauty,” “The Incredibles,” “Coco” and many more,” says Disney. The new show premieres at 9:05 PM ET, prior to the Star Wars: A Galactic Spectacular fireworks show.

If you want to keep partying after the park closes, tickets are now on sale for a Disney After Hours event taking place on May 1 from 9:30 PM – 12:30 AM. You can experience little-to-no wait time for some of the park’s most popular attractions, plus because this is an extra-special night, the evening also features beloved Disney characters greeting guests in the Chinese Theatre Courtyard, at Star Wars Launch Bay, and more. Event attendees can also enjoy an encore performance of Wonderful World of Animation. To purchase tickets to the Disney After Hours event, which cost $125 plus tax if purchased in advance, click here.

Don’t miss these 30th anniversary celebrations at Disney’s Hollywood Studios on May 1!