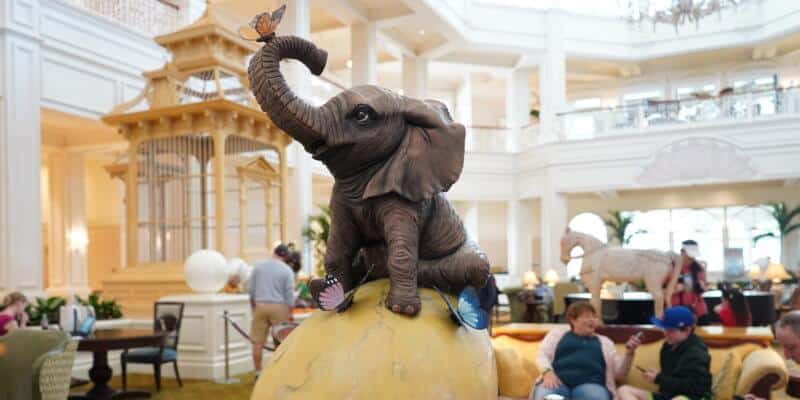 It’s already April and Easter is on its way, which means an eggstravaganza has made its way to Disney’s Grand Floridian Resort & Spa — the hotel’s 2019 Annual Chocolate Easter Egg display!

For 24 years, the bakery team at one of Walt Disney World’s most premier resorts has been designing and hand-decorating larger-than-life Disney-themed chocolate Easter eggs to be displayed for guests to help celebrate the springtime holiday of Easter during the month of April. And this year, the pastry team did not disappoint as the display has been brought to new heights thanks to Dumbo, the famous elephant known for his amazing ability to take flight, who is on display as the centerpiece!

The elephant can also be found at the entrance to the main lobby, where he can be seen holding on to what appears to be his mother’s trunk.

Besides the addition of the animated animal that has soared into our hearts, the display also includes many other marvelous Disney-themed sights!

Eggs themed after Disney’s more classic films include “101 Dalmatians,” “Lady and the Tramp,” “Snow White,” “Journey to Atlantis,” “The Fox and the Hound,” “The Nightmare Before Christmas,” “Pinocchio,” “The Lion King,” “Beauty and the Beast,” and “Aladdin.”

Some other favorites of ours from the collection include a Minnie Mouse, pearl, “The Wizard of Oz,” a carousel, a BB-8 and some others featured below.

All of the eggs pictured in this article will continue to be on display in the main lobby of Disney’s Grand Floridian Resort & Spa until Sunday, April 28, 2019.

Which of these eggs is your favorite? Let us know in the comments below!