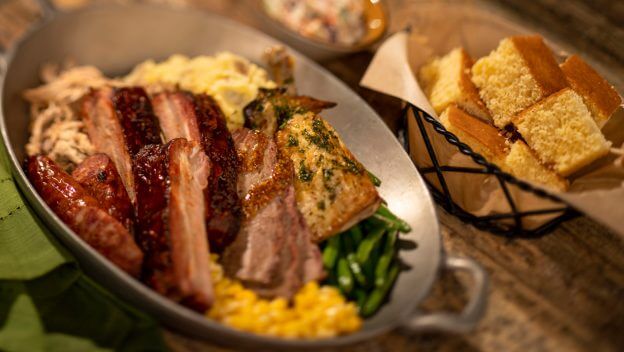 Whispering Canyon Café, which is known for its frontier fare and sassy Cast Members, has an assortment of new vittles for hungry guests at Disney’s Wilderness Lodge.

And for those who want to steer clear of meat and fish, there’s the Vegan Dinner Skillet with maple-chipotle BBQ jackfruit, spicy vegan sausage, mustard-glazed beefless tips, and herb-brushed trick’n chick’n.

Each of these skillets comes with an assortment of sides, which may include coleslaw, sautéed green beans, buttered corn, oven-roasted carrots, charred peppers, BBQ cauliflower, Yukon mashed potatoes, or roasted potatoes. Plus, each skillet is also served with freshly-baked cornbread and honey butter. Yum!

Other than the many new skillets, the restaurant also has a tempting Apple Pie for dessert. This slice comes dusted with powdered sugar and it’s served with a scoop of vanilla ice cream.

Newly-themed cocktails are also on the menu, including the Bourbon Cowboy. The drink comes garnished with apple slices and pairs with any of the lunch or dinner skillets. A selection of draft beers and wines are also available.

To see the full menu at Whispering Canyon Café and make a reservation, head over to the Walt Disney World website.