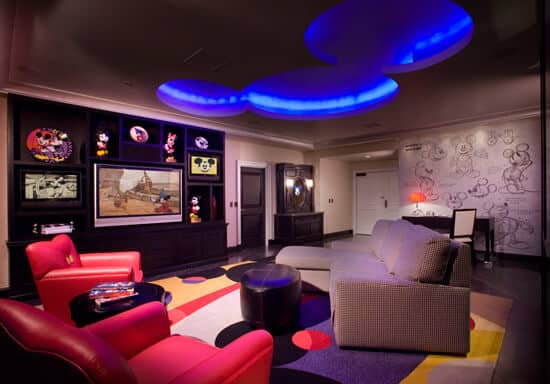 The Disneyland Hotel offers rooms in three themed towers — Adventure, Fantasy, or Frontier — but the theming really goes to the next level inside the hotel’s Signature Suites. Each of these five special suites feature different Disneyland Park themes and décor, providing a magical, VIP home away from the parks.

These rooms were designed by Walt Disney Imagineering and feature an incredible amount of detail for Disney fans. “There is so much detail in each one of these rooms,” guest services manager Scottie Whitaker told Los Angeles Magazine. “You can spend an entire week and there’s no way you’d see every last detail that they put into these.”

Below, take a peek inside the five Signature Suites at Disneyland Hotel, which are themed after pirates, princesses, explorers, miners, and of course, Mickey Mouse.

Pirates of the Caribbean Suite

Fans of the classic Disney attraction and movie franchise can experience the pirate’s life in this immersive room. The suite is filled with treasures (some of which are locked in cases), including “a replica of Captain Jack Sparrow’s revolver, rare pirate figurines (discontinued) from the popular Walt Disney Classics Collection, a lithograph signed by Disney Legend “X” Atencio (Lyricist for the song for “Yo Ho, Yo Ho, A Pirate’s Life For Me”) and a replica of the mysterious Davy Jones’ Dead Man’s Chest,” says Disney.

The most whimsical Signature Suite creates a fairy tale for two. “Guests enter the Fairy Tale Suite delighted by pixie dust and the appearance of Tinker Bell, who illuminates a crystal castle encased in the wall. A marble foyer descends into an enormous bedroom overlooking the entire resort through floor-to-ceiling windows,” says Disney.

The highlight of this suite has to be in the incredible bathroom, which features a hand-cut mosaic of a stylized Sleeping Beauty Castle.

The Adventureland Suite, with its 1930s safari décor, might be our favorite of the bunch. The rooms are filled with delightful details and the master bedroom includes “a grotto with a foot spa, steam and rain showers, and lighting and sound effects that make you feel like you’re in a rain forest or a savanna,” says Disney.

This suite sleeps up to six people in 1,400-square-feet of Big Thunder Mountain Railroad-inspired luxury. According to Disney, the suite’s doorbell sounds like howling wolves and guests enter via a mine shaft foyer. A button on the wall triggers sound effects from the fan-favorite Disneyland attraction.

The suite includes a living and dining area, two bedrooms, a bathroom with a free-standing copper tub and an adjacent steam shower.

Of course, the penthouse is themed after Disney’s biggest VIP, Mickey Mouse. The ultra-modern suite is filled with Mickey designs and memorabilia and offers stunning views of the parks through floor-to-ceiling windows. The suite includes an open living room, dining, and kitchen area, two bedrooms, and two and one-half bathrooms. “Photos and sketches from the Disney library are prominently displayed, featuring images of Walt and Mickey rarely seen by the public,” says Disney.

So how much does it cost to stay in one of these Signatures Suites? You’ll have to call Disney for exact pricing and availability, but you can expect to pay thousands of dollars per night for these swanky suites. For availability and pricing, call (714) 956-6425.

Comments Off on Want to be a Disneyland VIP? Stay in the Signature Suites at Disneyland Hotel