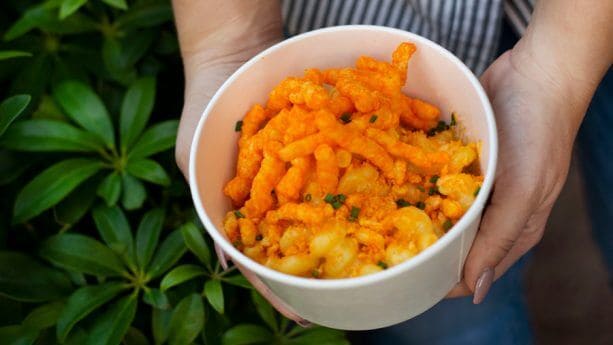 We’re a few days into March and the new month is bringing lots of new food to Disney Parks, including a Mac & Cheese Truck at Disney Springs! In addition to that exciting news, Disney also shared details on new menu items throughout Walt Disney World and Disneyland park. Below, preview the new dishes you can try starting this month at Disney Parks.

A Mac & Cheese Truck joins the lineup of food trucks on the West Side of Disney Springs. You can indulge in the following cheesy dishes:

Look for these mouthwatering options when the Mac & Cheese Truck arrives at Disney Springs this month!

Also at Disney Springs, there are a few new items on the menu at B.B. Wolf’s Sausage Co. New foot-long hot dog options include:

If you want to try all three dogs, you can opt for the Three Little Pigs Hot Dog Sampler with mini versions of each one. Other menu additions include:

For dessert, be sure to try the Maple Bacon Cookie Dough topped with candied bacon!

Stop by the new Neighborhood Bakery at An Incredible Celebration on Pixar Place to fuel up on Super-inspired food. Savory items include:

And save room for the following dessert options:

There’s also the blue raspberry Frozone Slush with whipped cream or the Secret Identity with frozen Coca-Cola and cherry cotton candy, both of which can be topped with a Pixar-themed novelty straw.

Starting March 6, you’ll find a new savory option at Yorkshire County Fish Shop. In addition to the Fish and Chips, the eatery will serve Traditional English Meat Pie, which is pie crust dough filled with chicken, mushroom, bacon, leeks, thyme, and nutmeg in a creamy gravy and served with chips.

Tiffins has some new options on the kids’ menu. Young Disney diners can choose from the following:

For dessert, kids can opt for the Cookies and Cream Brownie or the Tres Leches (triple-soaked vanilla sponge cake).

And over on the opposite coast, you’ll find several Mardi Gras offerings at Disneyland park. At Café Orléans, you can try these special offerings:

At French Market,  look for the Mardi Gras Coconut Cake with layers of royal-colored sponge cake, pastry cream, and a dusting of coconut flakes.

Blue Bayou is serving a special Mardi Gras menu in addition to the regular offerings. Dishes include:

Look for these delicious new options at Walt Disney World and Disneyland starting this month!