Don’t just fly, soar with Dumbo the flying elephant! If you’re a frequenter of the Disney Parks, chances are you’ve taken a ride on the Dumbo attraction in Fantasyland. Now, you don’t have to visit a Disney Park to fly with Dumbo himself. In honor of the new live-action “Dumbo” film releasing this month, Walt Disney Studios has partnered with Spirit Airlines to bring the flying elephant to life on airplanes.

The adorable, Dumbo-themed Spirit Airlines Airbus A321 features larger-than-life images of Dumbo himself on the side of the plane. As guests soar through the air on the Airbus, they can get excited to be flying with the original flying elephant alongside them during the entire trip. Take a look at the images of the plane below! 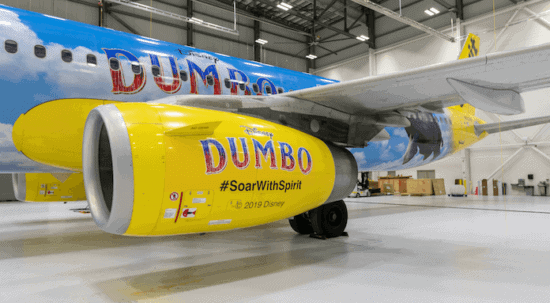 Of all the Disney characters to be featured on an airplane, we think Dumbo is the most fitting. Dumbo’s story of finding the courage to fly despite adversity is something that can inspire all of us. In both the original animated film (released in 1941) and the 2019 remake (which hits theaters later this month), the character of Dumbo is not only separated from his mother from a young age, but also is set apart from the rest of his animal peers with his extremely large ears. But Dumbo’s ears turn out to be the reason he is able to fly, despite the ridicule he faces for being different. The message that our differences make us beautiful and unique is one that can resonate with anyone who has ever felt bad for being different. We’re glad to see Spirit Airlines promoting courage and confidence in the company’s “Dumbo” airplane.

Take a look at the time-lapse of the “Dumbo” plane coming to life:

If you want the opportunity to fly on the “Dumbo” airplane with Spirit Airlines, check this out. Guest traveling out of Detroit, Orlando, San Juan, Fort Lauderdale, and Baltimore/Washington will have the chance to fly in this airplane during the first three days of service beginning today. After that, the plane will travel throughout the U.S. for the next two months to commemorate the theatrical release of “Dumbo.” “Dumbo” hits theaters on March 29.

Which Disney movie would you like to see promoted next on an airplane? Let us know in the comments!