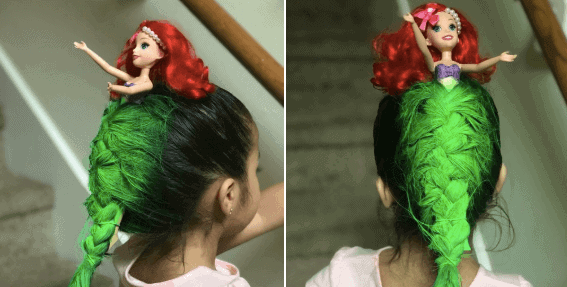 Crazy Hair Days have become a popular competition at schools across the country, and one Disney-loving mom went all out for her daughter’s hairdo.

my sister had crazy hair day at school today and my mom was not playing games and really wanted her to win ? pic.twitter.com/owo78whIWI

Did you spot a mermaid theme in Ariel and Atlantis’ names, too? As Ariel shared on Twitter, their names were inspired by “The Little Mermaid,” so it’s only fitting that our favorite mermaid was the basis for this fun hairdo. From the front, it looks like Atlantis has a bright red pom-pom in her hair. But when she turns around, the full Ariel ‘do is revealed. Here’s another look at the style (click through to see front and back):

Obviously, Atlantis won the Crazy Hair Day competition at her school. Atlantis is only in pre-kindergarten, so we’re sure her mom will come up with plenty more crazy hair creations in the years to come!

Have you ever created a Disney-inspired hairstyle for your kids or yourself? Share your stories in the comments below!