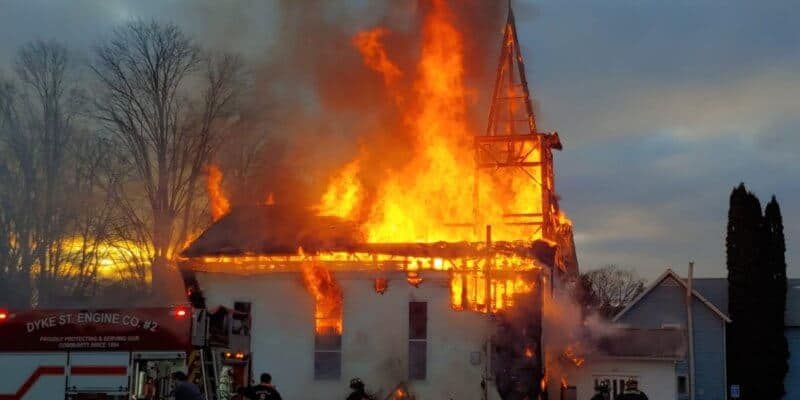 Charlotte Street, in the historic district of St Augustine FL, was once the home to an eccentric museum known as Wolf’s Museum of Mystery.  Tucked away in the two-story green 1890’s structure were scores of curious, artwork and a lifetime of love for all things weird.

Landing a much larger former church building in upstate New York, the couple packed up their pets, art, and artifacts to start a new grand adventure. Tragically, just days after getting countless boxes and rare items moved into the building, they lost everything in a horrific fire which consumed the entire collection and destroyed the building. 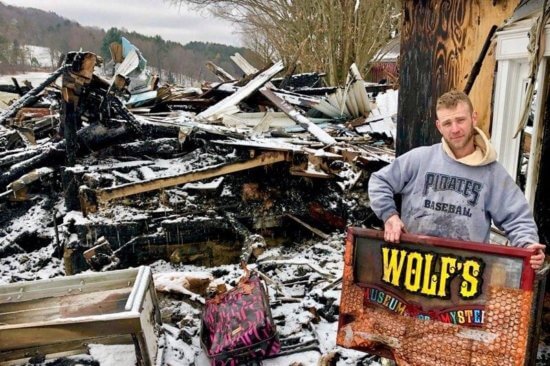 From 2014 until the end of 2018, Wolf and Ali Von Mertz lived and operated this unique oddity shop and display of goods to the delight of thousands of St. Augustine visitors. At Wolf’s Museum of Mystery, strange and unusual items shared space with a Lizzie Bordon bedroom, alien autopsy room, and voodoo kitchen. Rarities like an iron lung, human skull cap, and tribal masks were among the amazing collectibles from around the world. 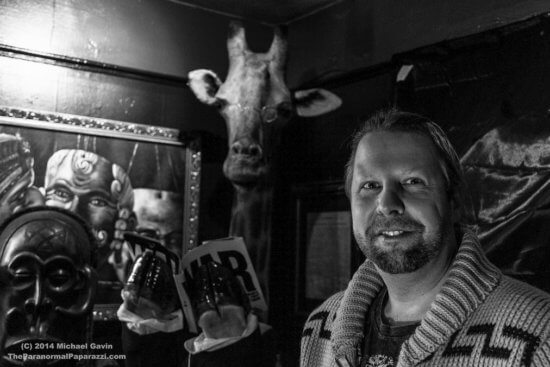 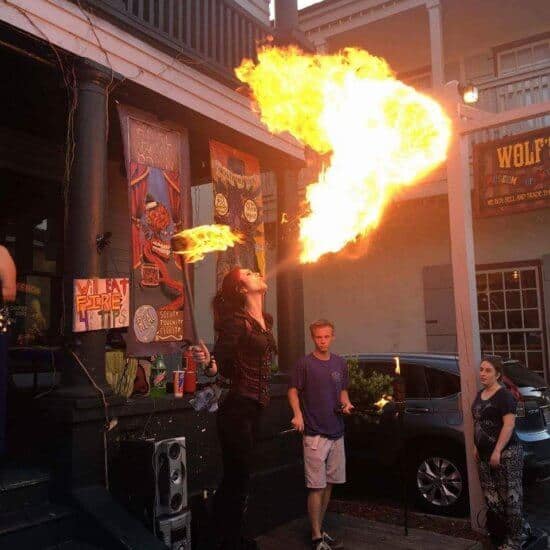 After four years of operating the museum, hosting special events and acts (fire breathers, mermaids, fortune tellers, etc.), and even shooting two motion pictures, the couple decided to follow their dreams to a larger venue in upstate New York.

The former Methodist church building they found in Willings NY was to be converted into several museum galleries and a theater – all part of a much larger Wolf’s Museum of Mystery. The basement was given over to their pets and turned into a small sanctuary. 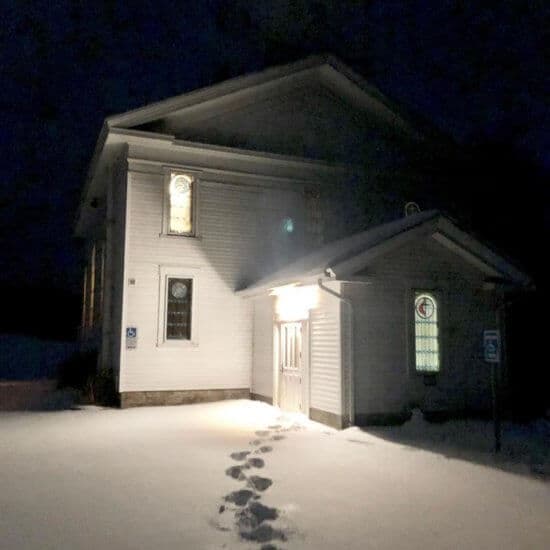 This past weekend (2/10/19), just as it looked things were going perfectly, tragedy struck.  As the couple was out grabbing supplies, a fire broke out in the old church. Such was the intensity of the blaze, firefighters from nearby towns were called in to help control the flames. 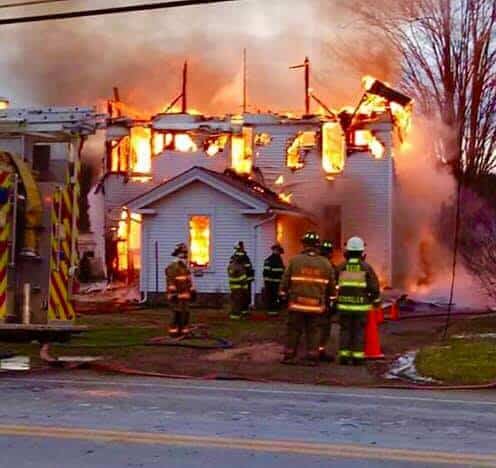 Fortunately, Wolf and Alli were not in the structure at the time of the fire. Sadly, however, several pets, animals and all of the museum’s artifacts and art were lost in the blaze. Fire officials are still seeking a cause for the incident.

“The unimaginable has happened here. Lilly; Koby; Misery; Mr. Nibbles; Melania; Irma and our entire albino rat colony perished in a fire. We don’t know the cause. Along with everything that made up the museum and which we owned personally so the dream of relocating our family and recreating the museum is over. Can’t replace the 100s of art pieces with their thousands of hours spent nor the rare things acquired around the world the past 3 decades but losing our entire animal family is more then we can bare and there is no words to write to express our anguish we are suffering… We want to thank everyone who has supported us.

“There is no recovery from what has happened but we are sharing this link created by our friend who is trying to help us. Thank all of you who have expressed their feelings and reached out to us.”  – Wolfgang Von Mertz (via Wolf’s Museum of Mystery Facebook page) 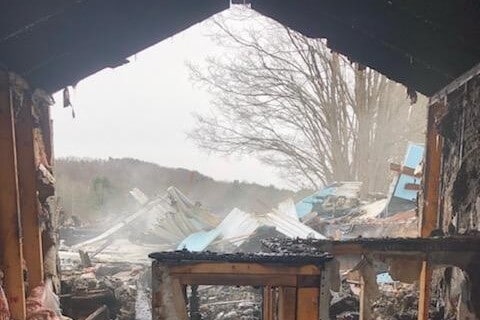 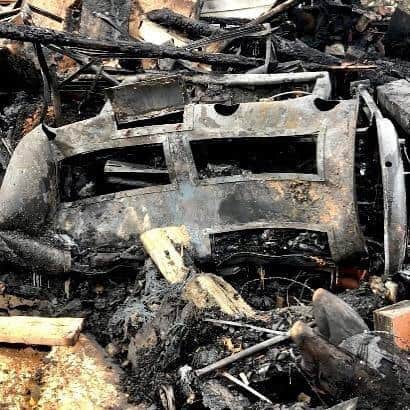 Many who have loved and support the family and their museum expressed their support and shock on social media. Support began to pour in as a GoFundMe account was established in an attempt to help Wolf and Alli, as they lost everything. 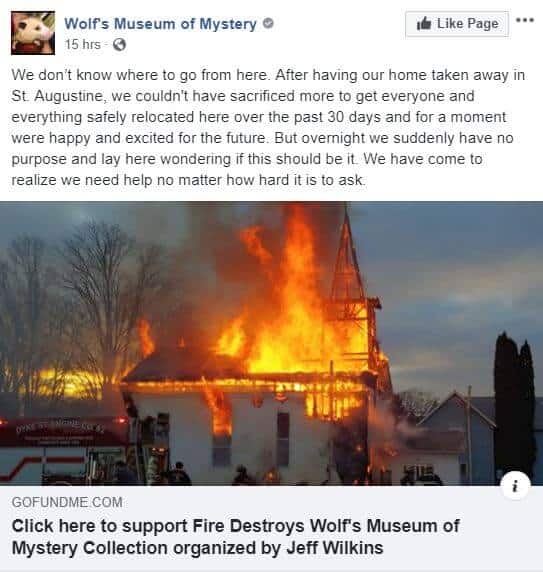 While I realize a story of this nature is not the norm for this forum, I also recognize that this site is about dreams and experiences. I’ve been to Wolf’s Museum of Mystery several times when it was open here in Florida.  I’ve even enjoyed a bit part in one of the productions. Seeing a dream get crushed like this is heartbreaking, to say the very least. It is my hope that those who remember the museum can come together and help Alli and Wolf in rebuilding. – MGavin