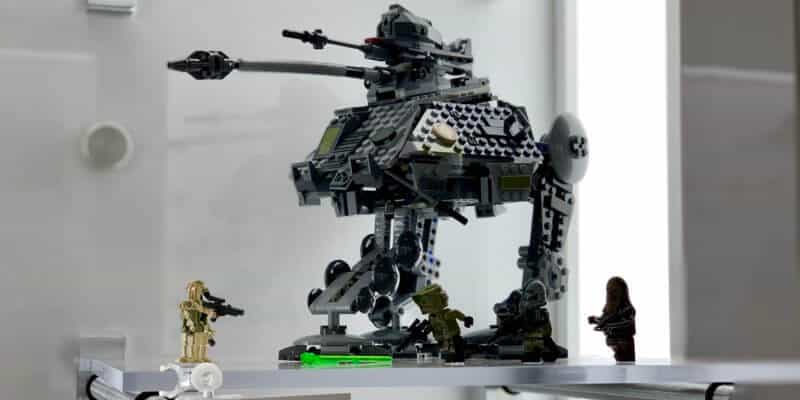 Builders, get ready for some fun new LEGO sets coming your way soon! During Toy Fair 2019, Inside the Magic toured the LEGO booth and got a look at the new Disney and Star Wars sets hitting shelves in the coming months. Plus, we got a peek at LEGO’s amazing new Hidden Side augmented reality sets.

“Toy Story 4” arrives in theaters on June 21, 2019, and LEGO is releasing five sets inspired by the movie this spring. The new movie features a carnival setting, which plays into some of LEGO’s new sets.

This general “Toy Story” themed set was also on display:

As for the Disney Princesses, LEGO is celebrating three princess anniversaries with the Royal Celebration Set (283 pieces, $39.99). This set celebrates Aurora’s 60th, Ariel’s 30th, and Tiana’s 10th anniversary in one fun set! You can purchase here.

Other new Disney Princess sets feature Jasmine, Cinderella, Ariel, and Rapunzel. These sets are available now with prices ranging from $9.99 – $29.99. You can purchase here.

To commemorate the 20th anniversary of LEGO Star Wars, five of the most popular models from the franchise have been redesigned. Sets include a copy of the original minifigure from the initial release, a custom-printed 20th Anniversary plate, and retro packaging. These sets are available where toys are sold starting April 1.

Build Boba Fett’s personal Slave I starship and travel with him through the galaxy in search of fugitives! Grab the handle and fly him around. Pull the triggers to fire the spring-loaded shooters. Load Han Solo trapped in carbonite into the hold and deliver him to collect your payment. It’s another exciting day in the life of a bounty hunter!

Speed to victory in Anakin’s Podracer! Sit young Anakin Skywalker in the cockpit and lower his goggles ready for the race. Then fire up the huge engines, grab the play handle and zoom through the canyons of Tatooine…or your living room! With Anakin at the controls, victory is yours!

Sound the alarm, Echo Base is under attack! Win the Battle of Hoth with Luke and Dak Ralter in their amazing Snowspeeder from Star Wars: The Empire Strikes Back. Speed over the ice and launch the spring-loaded shooters. Then fire the rear stud shooter and harpoon with string. On the ground, help the Rebel Trooper take aim and fire the gun tower stud shooter. Those Imperials must be defeated!

Protect the Wookiee warrior with the armored Clone Scout Walker! Sit the Kashyyyk Trooper in the seat of the armored AT-RT Walker and stride in battle. Turn and fire the stud shooter before the Dwarf Spider Droid destroys the trench with its own stud shooter. The Clone Army must win at all costs!

Deploy the troopers with the Imperial Dropship! Load them onto the platform and store their stud blasters for the flight. Then sit the Shadow Trooper in the cockpit, fire up the engines and blast off for another exciting battle against the Rebels!

In addition, 24 LEGO sets featuring Star Wars will be added to the franchise. These sets are based on characters and films from across the Star Wars films and animated series, including Rebel A-wing Starfighter and TIE Fighter Attack. You can preview some of these new sets below.

Though this isn’t based on a Disney property, LEGO Hidden Side was too fun not to share. From LEGO’s press release:

LEGO Hidden Side is an augmented reality-enhanced LEGO play theme where kids must turn a haunted world back to normal – one ghost at a time. It is the only play experience available today that fully and seamlessly integrates augmented reality (AR) with physical construction to reveal a hidden world of interactive play. Activating the bespoke AR app brings LEGO models to life, revealing a hidden world of interactive mysteries and challenges to solve. When combined, the two worlds make each other even more compelling and fun!

LEGO Hidden Side includes 8 building sets full of awesome functionality and secret surprises that offer the build and roleplay fun of any LEGO play theme. Each model can be built as it appears by day and has transforming functionality to become the haunted version of itself.

Kids assume a first-person perspective to join the lead characters, using their mobile phones to see and solve paranormal mysteries beneath the surface of their town. By holding their phones up to a physical LEGO model, “points of possession” are activated, releasing virtual ghosts that kids must then capture to stop the haunting. Kids must keep one hand in each world – physical and digital – to progress the play. A short digital game can be played independent of the building sets. The app will add new ghosts, game challenges, and randomization of gameplay to keep kids coming back to their models.

LEGO Hidden Side is recommended for ages 7 and up, and it arrives in late summer 2019.

Which of these Disney and Star Wars sets from LEGO are you most excited about? Share your thoughts in the comments below, and happy building!

Comments Off on LEGO Disney and Star Wars sets from Toy Fair 2019, plus a look at LEGO’s new Hidden Side