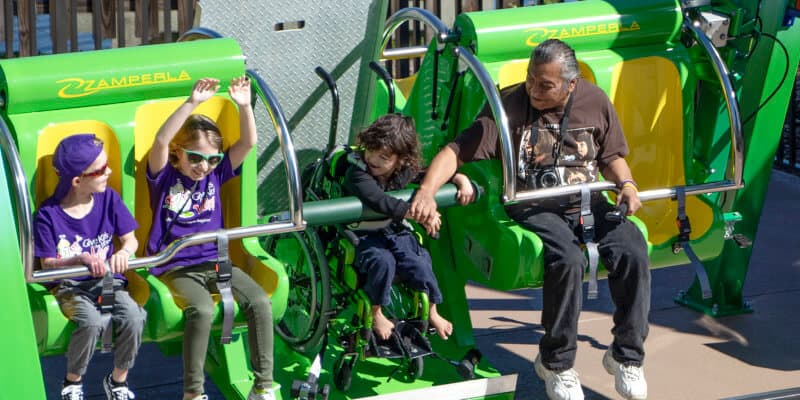 Credit: Give Kids The World

The Kissimmee-based non-profit resort for critically ill children and their families officially opened Kelly’s Sunny Swing on Thursday, February 14, 2019, with a ceremony attended by families, staff, and volunteers. The attraction was named after a young girl named Kelly who stayed at the resort in 1993. After returning home, her parents sent Give Kids The World a heartfelt letter describing the impact their stay had on the family. Give Kids The World President and CEO Pamela Landwirth still carries that letter to this day.

“It’s so important that we make everything as accessible as possible for our visiting families,” said Landwirth. “We’re very excited to unveil this new attraction. It’s going to bring a lot of joy to a lot of folks.”

The brightly-colored swing is topped with rainbow and smiling sun and features eight standard seats and one specially designed space to accommodate riders using wheelchairs. Kaylin, a 9-year-old who previously visited Give Kids The World in 2014, was one of the first to ride the new attraction after its grand opening. “It was hands-down one of my favorite rides at the Village,” she said.

Kelly’s Sunny Swing is the fourth wheelchair-accessible attraction at Give Kids The World, joining a carousel, child-sized train, and pedal-powered flying ride. Zamperla, an Italian design and manufacturing company, built the swing and donated it to Give Kids The World Village. It’s the third ride Zamperla has donated to the Village.

Give Kids The World Village provides meals, transportation, nightly entertainment, and complimentary passes to Orlando’s world-famous theme parks and other attractions. There is no cost for visiting families and no child is ever turned away.

Walt Disney World Resort is a founding partner of Give Kids The World Village. When visiting, wish children receive a Mickey plush, plus Disney characters visit twice a week and Disney VoluntEARS contribute their time year-round. Kids and their families are also provided with accessible experiences at Walt Disney World.

To learn more about Give Kids The World, head over to their website.