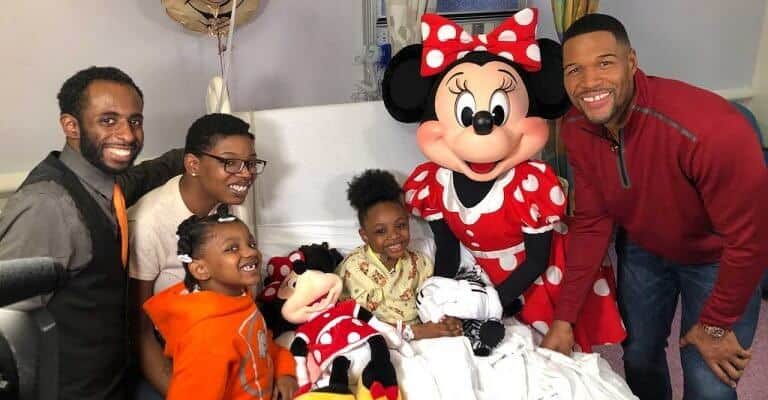 A young Minnie Mouse fan and “medical miracle” was recently surprised with the trip of a lifetime to Walt Disney World Resort after successfully undergoing a kidney transplant.

8-year-old Lexi was born without a bladder, a rare medical condition that very few babies survive. When Lexi was 6 years old, doctors at Mount Sinai Kravis Children’s Hospital in New York successfully constructed a new bladder for her, prolonging her life. But now at the age of 8, she had to face a new battle: she needed a kidney transplant.

“My dad was telling me he’s going to do this with me, so I’ll be okay,” Lexi said in an interview with Good Morning America. Lexi’s father, Luther, was a match and gave his daughter his own kidney.

But a successful kidney transplant wasn’t the only good news coming Lexi’s way. After her surgery, Good Morning America’s Michael Strahan surprised Lexi with Minnie Mouse balloons and a plush, as well as a visit from Minnie Mouse herself! Lexi and her whole family (including her 6-year-old sister) smiled and cheered with excitement upon hearing that they were being invited on a trip to Walt Disney World.

Watch the video below to learn more about Lexi’s bravery and story, as well as see her priceless reaction to her Minnie Mouse and Walt Disney World vacation surprise!

This isn’t the first time Disney has given back to children in need. The Walt Disney Company announced in March 2018 their plan to dedicate $100 million to reinvent the patient and family experience in children’s hospitals worldwide. This initiative is part of their Team of Heroes community outreach and philanthropy efforts that will continue to roll out over the next few years. Here’s what CEO Bob Iger said of the initiative last year:

Disney’s timeless stories have touched hearts and lifted spirits for generations, and we believe they can bring comfort to children and families going through a very difficult time. Using the powerful combination of our beloved characters and legendary creativity, we’re planning to transform the patient experience in children’s hospitals around the world—creating a personalized and engaging atmosphere that will inspire young patients and ease the stress of a hospital stay.

It looks like Lexi isn’t the only child in need receiving an unforgettable experience in times of trouble. We can’t wait to hear more about how Disney will give back to children in hospitals around the world. We hope this is just the beginning!

What do you think of Lexi’s unforgettable Walt Disney World surprise?