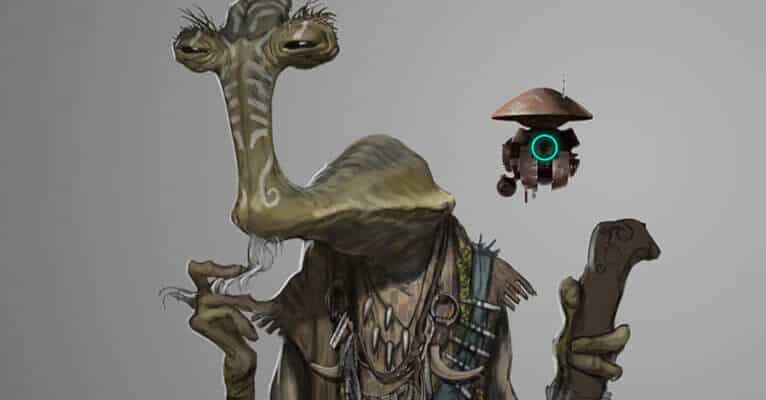 Releasing in April and written by Ethan Sacks, the five-issue miniseries introduces readers to Dok-Ondar, the infamous Ithorian collector of rare antiquities. Dok-Ondar was mentioned briefly in “Solo: A Star Wars Story,” and Sacks elaborated on the character’s role in the upcoming comic series. “There’s a reason Dok-Ondar’s name ripples far and wide in the “Star Wars” universe,” he told StarWars.com. “He’s a mysterious Ithorian who is the proprietor of the most notorious antiquities shop in the galaxy. And every item has a story behind it. Some more dangerous to listen to than others.”

According to StarWars.com, the comic series will also explore “what happens when the First Order reaches the edge of wild space. The key to saving this lawless outpost might just involve a job pulled long ago by none other than Han Solo and his cohort Chewbacca.”

The new series will be illustrated by Will Sliney, the artist behind the “Beckett” one-shot comic based on Woody Harrelson’s character in “Solo: A Star Wars Story.” Sliney also penciled the comic adaptation of “Solo.” Cover art will be created by Walt Disney Imagineering and Lucasfilm artists.

For fans who are eagerly awaiting the opening of Star Wars: Galaxy’s Edge at Disney Parks, this new comic series promises to be a must-read peek into Black Spire Outpost on Batuu. “Armed with top-secret sketches and information from Walt Disney Imagineering and Lucasfilm, we are keeping this authentic to the spirit of this rich new setting,” says Sacks.