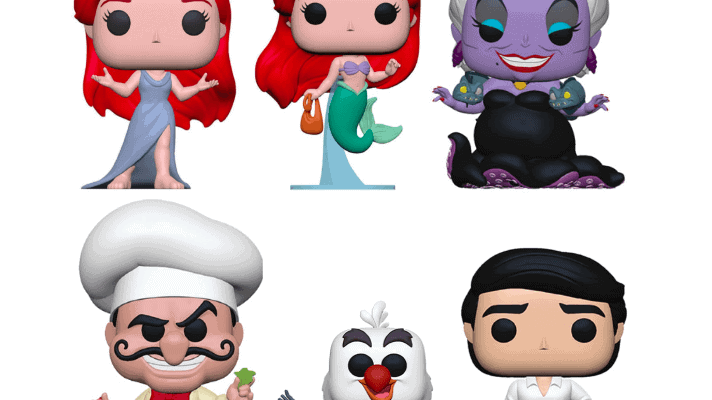 The world’s favorite superhero family is ready for action, complete with super paraphernalia. Bring 5 Star figurines of Mr. Incredible, Elastigirl, Violet, Dash, and Jack-Jack home and they’ll protect your collection from any and all villains. You can pre-order each of these figures here.

Take home 5 Star Ariel, Ariel in her pink dress, and the villainous Ursula, as well as a few of their pals and some of Ariel’s trinkets. You can pre-order these figures here.

Round out your Disney collection with Pop! Ariel wearing a purple dress, Ariel with a bag, Ursula with her beloved eels, Chef Louis, Scuttle with a fork, Prince Eric and a 10” Ursula.  All figures are sold separately and cost $10.99, except for the 10″ Ursula, which is $34.99. You can pre-order these figures here.

Journey to where the gods are constantly plotting and the stakes are high. Fortunately, baby Hercules and baby Pegasus are indifferent to the scheming of the gods but these SuperCute plush beings are cuddly enough to inspire even Hades to put off his evil plotting. You can pre-order here.

You can pre-order the adorable Dumbo plush here.

Woody and Buzz Lightyear might make an unlikely duo. Woody’s a pull-string cowboy doll with a penchant for orderliness and helping his kid above all else and Buzz Lightyear is an infinity-obsessed space ranger who takes himself very seriously. But friendship blossoms even in the unlikeliest of places as this Vynl. Woody and Buzz duo prove.  You can pre-order the set here.

With this all-new Harry Potter 5 Star collection, Professor Sprout’s Herbology class is in session and Gryffindor students Hermione Granger, Harry Potter, and Ron Weasley are doing the best they can with their Mandrakes. Wearing their protective earmuffs, the trio is on the path to repotting the screaming plants. Meanwhile, Dobby the House-Elf has acquired a sock hidden inside Tom Riddle’s destroyed diary meaning that Dobby is, at long last, a free elf. You can pre-order here.

Two of the Wizarding World’s favorite oddballs make a compelling Vynl. duo. Ravenclaw Luna Lovegood is wearing her beloved Spectrespecs and holding a copy of the Quibbler and Gryffindor Neville Longbottom has a plant celebrating his favorite subject: Herbology. You can pre-order here.

Celebrate the Wizarding World with SuperCute Plush witches, wizards and magical creatures, including plush Hermione Granger, Harry Potter, and Ron Weasley seen in the process of getting sorted by the infamous Sorting Hat, and Fawkes, Dumbledore’s loyal phoenix.

To see more of the new Funko revealed ahead of London Toy Fair, be sure to visit the Funko blog.