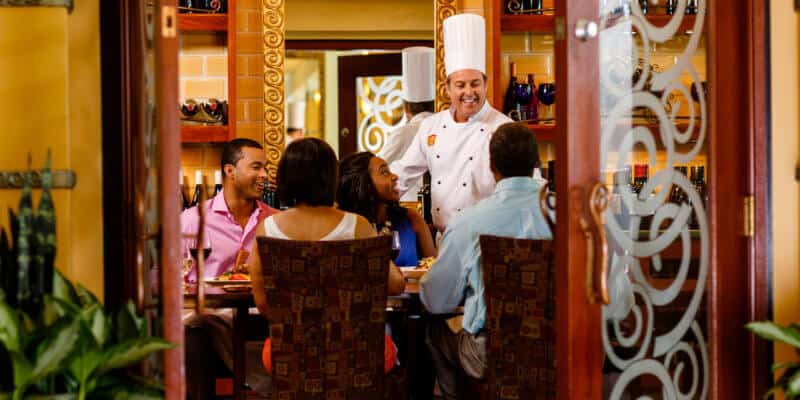 Delicious Disney 2019 brings a new series of dinners prepared by award-winning Walt Disney World Resort chefs. These dinners are often intimate events with no more than 60 people, and in the past, they’ve taken place at locations such as Markham’s at Golden Oak, Be Our Guest Restaurant, and Cinderella’s Royal Table.

According to the Orlando Sentinel, three dates have been announced so far this year. Each dinner takes place at Markham’s at Golden Oak.

A salute to Walt Disney’s “It’s a Small World” 55th Anniversary. It’s a tasting of the many lands of the Small World featuring chef Timothy Majoras from Flying Fish at Disney’s BoardWalk. Location: Markham’s at Golden Oak. $349 per person, which includes tax and gratuity.

Though menu details haven’t been revealed, we have an idea of what to expect based on previous events. In 2016, Lauren Delgado of the Orlando Sentinel enjoyed a spicy duck dumpling with chili oil and ginger, paired with a Japenese lager; Berkshire Pork Rillettes; Fragrant Poached Maine Lobster served in a salad of mixed greens, tomatoes, avocado, and edible flowers; Wagyu ribeye, braised short rib, vegetables, and potato mille-feuille. The meal was topped off with a dessert called “Georgia Peaches On My Mind Peach Tatin,” which included peach-brandy ice cream, canon ginger-peach compote and pistachio crumble. An assortment of chocolates was also served.