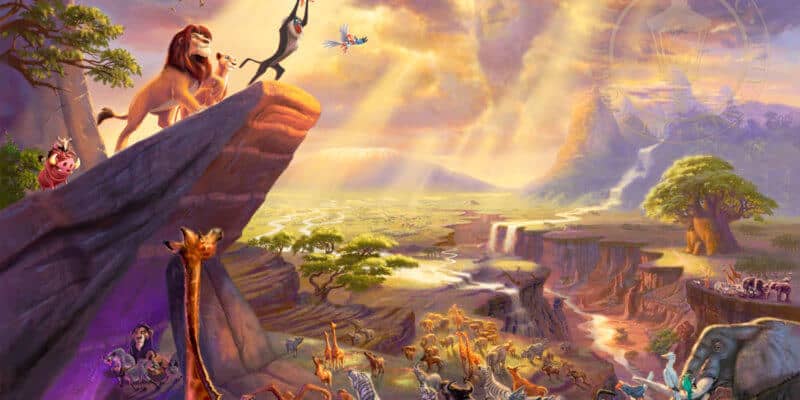 We love incorporating pieces of Disney magic in our homes, and we think these works of art by Thomas Kinkade are the best way to tastefully display your love of Disney. Thomas Kinkade Studios is having a Cyber Weekend sale on all of their limited edition art pieces, including many works of art from the Disney collection. On Saturday (24th) thru Tuesday (27th), shoppers will receive discounts of $50 off purchases of $300 or more, $100 off purchases of $500 or more, and $150 off the purchase of $700 or more.

The discount should automatically apply as items are added to your shopping cart, but if you don’t see the discount enter CYBER50, CYBER100, or CYBER150 as applicable to ensure you receive your discount.

Every work of art that Thomas Kinkade Studios creates is the perfect holiday gift, so we suggest you take advantage of their current sales. We know we’ll be shopping for all of our Disney-loving friends!

Our team at Inside the Magic is also hosting a giveaway thanks to our friends at Thomas Kinkade Studios. Three lucky Inside the Magic readers will win a 90 Years of Mickey 11″ x 14″ Gallery Wrapped Canvas valued at $79 each. Click here to enter our giveaway for a chance to win one of our favorite items from the Disney collection!

Our friends at Thomas Kinkade Studios are celebrating 90 Years of Mickey with a new Limited Edition Art release. https://buff.ly/2LnmGpN

Mickey Mouse made his public debut in the short film Steamboat Willie way back in 1928. It was the first cartoon film with synchronized sound which made the film, along with its star, an overnight sensation. The movie forever changed the world of animation and launched a brand-new empire full of funny, cool, clever, caring, silly and mischievous characters. Fast forward 90 years and the world’s most famous mouse embodies the adventurous, lovable optimist in all of us and has become one of the world’s most beloved original icons.

Thomas Kinkade Studios would like to congratulate Mickey on his 90th Anniversary and for showing us all that dreams really do come true.

Tangled Up In Love

When the kingdom’s most wanted and most handsome bandit, Flynn Rider, takes refuge in an old and mysterious tower, he’s instantly captured by Rapunzel, the spire’s beautiful and longtime resident. She has been locked away for years, forced to grow over 70 feet of magical golden hair, and desperately wants to see the kingdom’s annual floating lantern festival for her 18th birthday. The gutsy teenager strikes a deal with Flynn and together they begin a whirlwind adventure full of excitement–and possibly love.

Mickey and Minnie in Paris

In the Passport to Adventures series by Thomas Kinkade Studios, Mickey and Minnie, along with some of their closest friends, explore famous travel destinations around the world. Mickey and friends find themselves on an adventure in arguably the most romantic city in the world, Paris!

Dressed in traditional French attire, Mickey and Minnie enjoy playing tourist in their berets and stripped shirts after spending the morning at the café. Behind them are their dear friends, Daisy and Donald, creating quite a splash on their tandem bikes as they ride through the puddle filled streets of Paris. As Goofy greets his friends passing by, Pluto can’t help but drool over the ice cream sundae that is left unattended.

This simple story of a charming princess saved by a group of seven adorable dwarfs and a prince from the evil deeds of her vain and wicked Stepmother the Queen, made history when it was first released in 1937 as the highest grossing sound film of the time.

Now this timeless story of love, envy, and friendship has been recreated in this vibrantly colorful painting by Thomas Kinkade Studios in Snow White Dancing in the Sunlight, the third piece of the collection entitled, Dancing in the Light.

This romantic scene takes place in the courtyard of the kingdom’s castle, where Snow White and all of her friends are celebrating the defeat of the wicked Queen and reuniting of true love.

As the evening sun retreats beyond the ship, Susan Constant, and the horizon, a new connection is forming between two distant worlds. The artists at Thomas Kinkade Studios have brilliantly captured one of Disney’s most successful box office hits in one scene entitled, “Pocahontas.”

Immersed in traditional Kinkadian light reflecting off the water and illuminating the entire scene, many of the animated characters from the movie are scattered throughout this narrative panorama.

The extraordinary life and indomitable spirit of a truly remarkable Native American heroine is celebrated through the artistry and storytelling magic of this painting. “Pocahontas” is a compelling tale of a brave, compassionate young woman who loves nature and “listens with her heart” to help her choose which path to follow.

Walt Disney said it all began with a mouse, and in the newest Disney movie classic you might say it all begins with a frog. The Princess and the Frog has been brought to life with hand-drawn animation techniques, making it the first Disney traditional animation classic in years as well as the first ever to be set in the enchanted city of New Orleans.

In my painting I wanted to suggest the look of traditional animation yet maintain the sense of painterly mood that my work is known for. I lavished detail into the bayou flowers glowing with hidden fireflies, as well as the curving live oak draped with lacey Spanish moss. The characters of the movie swirl about the composition, inviting us to ponder the part each plays in the story.

As I painted my homage to this amazing story, I could not help but be moved by the intricate interplay between all of the magnificent creatures under Simba’s domain. I imagined a lush, colorful, and bountiful African plain rightfully reestablished to its splendor after Simba vanquished Scar and his comedic, yet treacherous, hyenas each now forlorn in their punishment. The multitudes of animals have been summoned to pay tribute to Simba’s new baby and their future regent as they wait under a spectacular sky illuminated in great anticipation. The world is as it should be…in harmony and perfectly balanced. Simba’s heir is exalted by Rafiki and proudly symbolizes what awaits when destiny is embraced, challenges faced, and one summons the courage to stand in the spotlight of providence. I trust that this image will both remind you of this fantastic story and its amazing characters and, most importantly, move you to face the future irrespective of history’s impasses knowing that the watchful and approving eye of the King is content as you embrace your place in the circle of life.

It is this wonder and excitement that greets us when we first step through the tunnel under the Walt Disney World® Resort® Railroad and travel back in time on Main Street, U.S.A. ® Inspired by Walt Disney’s hometown, Walt wanted this land to relive a simpler time filled with happy carefree memories shared with family and friends.

As you journey along the Victorian-themed Main Street in a horse drawn trolley, fire engine, jitney, horseless carriage, or on foot, you’ll pass such hometown staples as the Main Street Bakery and Main Street Cinema from a time and place long since passed.

Main Street leads us into a Magical Kingdom and to the soaring threshold of the majestic Cinderella’s castle. Lit at night by the Wishes Nighttime Fireworks Spectacular, it reminds us of the wishes we all share – for the magic of simpler times, happy endings, the laughter of children and the love of family and friends.

Thomas Kinkade Studios is proud to present Main Street, U.S.A.,® Walt Disney World® Resort®. It is our hope that you will join us in celebrating the magic.

Which of these amazing Disney art pieces will you be picking up from the Thomas Kinkade Studios Cyber Weekend Sale?

Comments Off on Thomas Kinkade’s Cyber Weekend Sale has been extended!