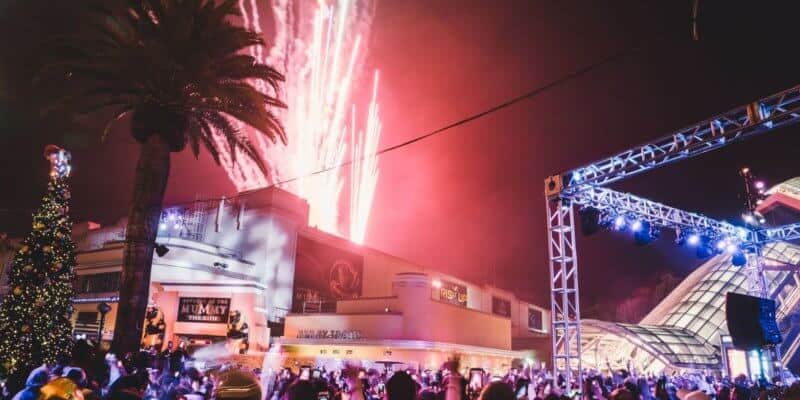 This year, you can ring in the New Year at Universal Studios Hollywood’s annual New Year’s event, EVE, the largest New Year’s celebration in Hollywood.

EVE is Universal Studios Hollywood’s end-of-the-year celebration on Monday, December 31, and invites guests to spend all day and night enjoying all of the theme park’s attractions and experiences. The event is included in the price of theme park admission and even offers extended theme park hours to 2 a.m. on January 1, 2019. The park-wide New Year’s Eve party begins at 9 p.m. on December 31 and features several DJs and live music entertainment hubs throughout the park, culminating in a New Year countdown and fireworks display at midnight.

Beginning at 9 p.m., Universal Plaza, Simpsons Plaza in Springfield, and the area near Revenge of the Mummy – The Ride will all transform into three themed party hubs, featuring live music, DJ shows, and entertainment until park closing at 2 a.m. Food and beverages including specialty desserts and alcohol as well as 2019 memorabilia will be available for purchase.

While every theme park guest can experience EVE, this year Universal Studios Hollywood is inviting guests to purchase an all-new Ultimate EVE package so they can ring in the New Year Universal style. The package includes admission to the theme park at 6 p.m., access to private lounges, buffet dining, private cash bars, reserved VIP viewing for the midnight fireworks display, a complimentary midnight champagne toast, commemorative 2019 party favors, and unlimited Universal Express access to all of the theme park’s rides and attractions.

Guests attending the annual EVE celebration can also delight in the magic of the holiday season with Christmas in The Wizarding World of Harry Potter, which will continue through January 6. If you’re planning on celebrating New Year’s Eve at Universal Studios Hollywood, be sure to stop by Hogsmeade to enjoy the stunning projections during The Magic of Christmas at Hogwarts Castle as well as the seasonal snowfall occurring periodically throughout the evening.