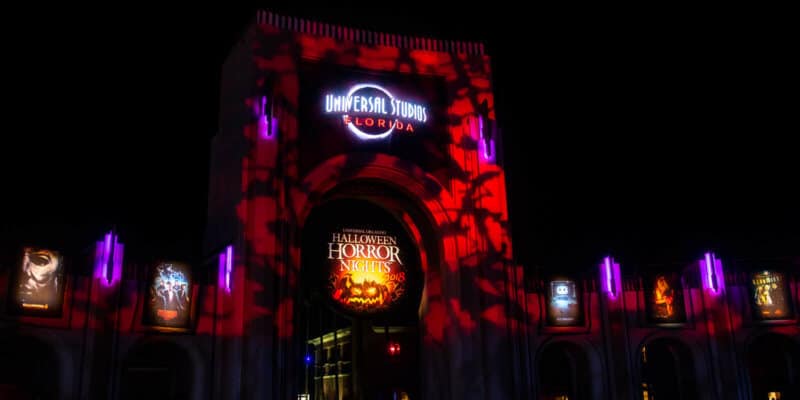 Inside the Magic survived the monsters, mazes and mayhem, ready to spread the wicked word about all the fiendish fun.  Ranked and reviewed, we’ll unveil Halloween Horror Night’s record 10 haunted houses, 5 scare zones, and its troupe of terrorizing chainsaw performers.

While imaginative original content might be the backbone upon which Halloween Horror Nights is built, intellectual properties (IPs) bring in hordes of happy haunt fans.  For HHN 28, five fear franchises, “Happy Death Day,” and “The First Purge” (combined as the Horrors of Blumhouse), “Halloween 4,” “Trick ‘r Treat,” “Poltergeist,” and “Stranger Things” add boo brand recognition to the popular fall festival of fright. 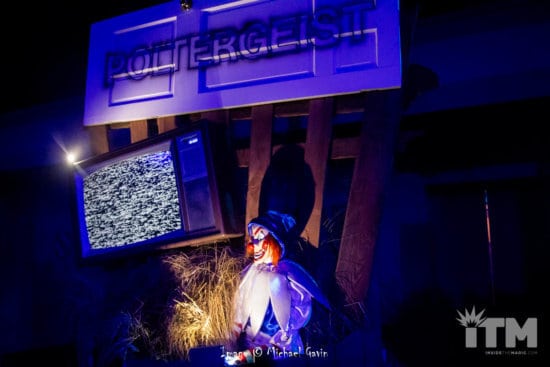 With the exception of Blumhouse and “Trick r Treat,” these horror heavy IPs lend themselves to the retro-eighties vibe running throughout Halloween Horror Nights.  Each eerie experience expertly recreates monstrous moments, earning anticipated anxiety from the forthcoming frights.  All five are ranked and reviewed (with a few spoilers) below. 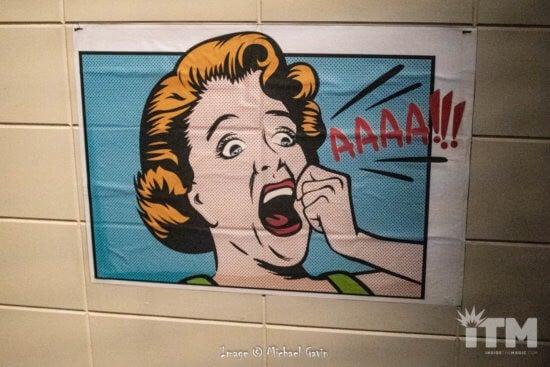 The Horrors of BlumHouse “The haunted minds behind Happy Death Day and The First Purge have spawned another horror house. Will you live to see tomorrow?” – Universal 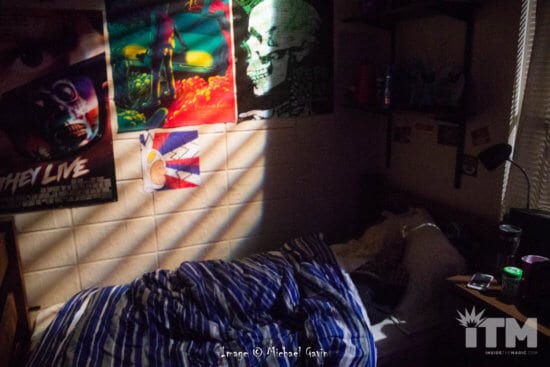 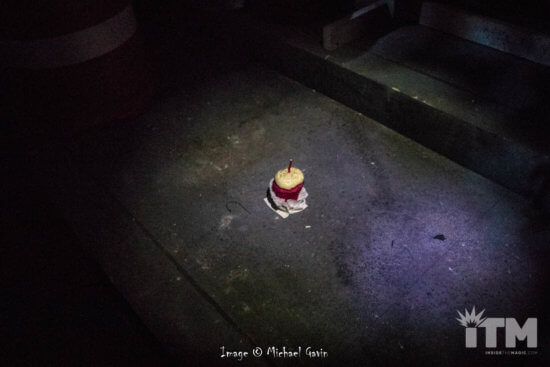 While frightfully fun, unfortunately this particular haunted house is the weakest link in 2018’s spook-tacular.  While the scares are there and sets are, as always, beautifully crafted, “Happy Death Day,” with its repeated “Groundhog Day”-like scenes borders on annoying. 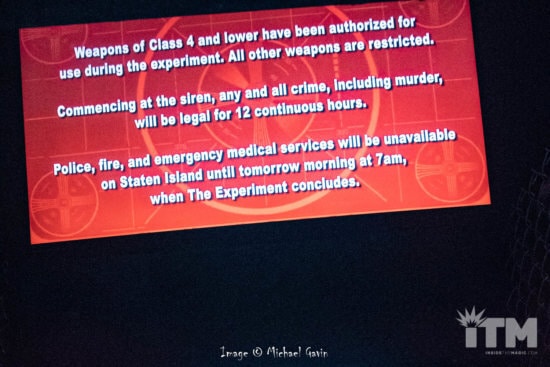 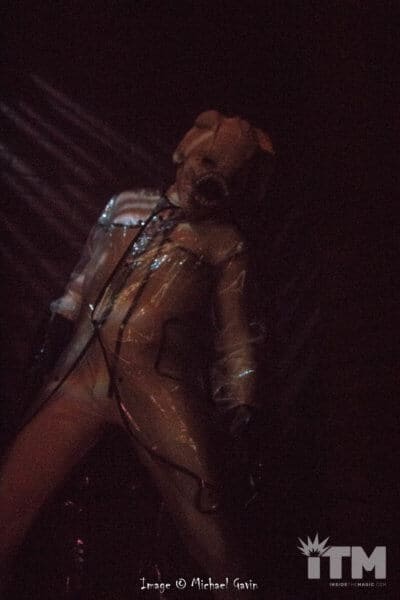 Part two of this haunt focuses on “The First Purge.”  Jumps and surprises continue, but the allure seems lost and tired after already enduring several years of Halloween Horror Nights Purge playtime. This particular fright film performed much better as a scare zone at past events.

“Halloween 4: The Return of Michael Myers” “Evil has returned in an all-new house. This masked maniac is unstoppable, and there’s nowhere to hide.” – Universal 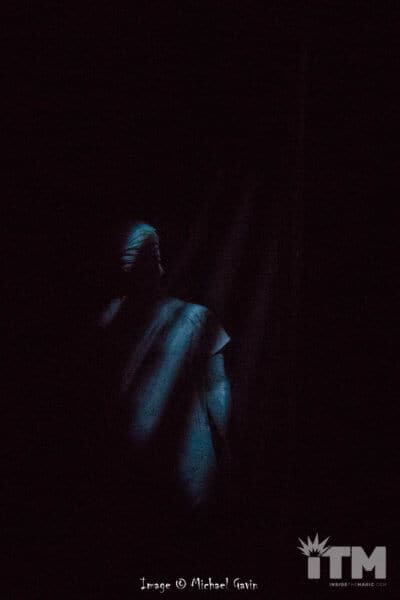 1988’s fourth entry of the “Halloween” Shatner-masked slasher series, saw the return of its iconic murdering menace Michael Myers (after an absence from part III).  True to film ambiance shines in set design, with all eighties era original props.  Taking “nowhere to hide” literally, the main monster is everywhere in this macabre maze. 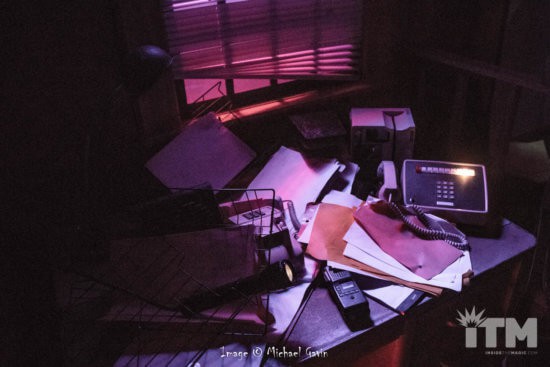 From bandaged hospital bed to beloved blue coverall and white washed, sci-fi star mask, Myers lurks and lunges at every turn, even to the point of several homicidal Michael’s appearing at the same time. 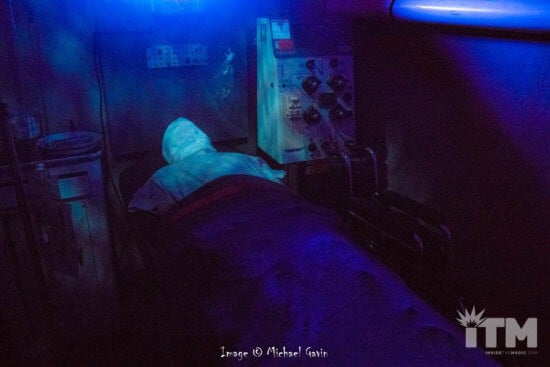 Fans who fear this supernatural slasher are sure to get their frights worth in this IP incarnation.  However, those unphased by the slasher style of spook have the opportunity to reminisce (or discover) a wealth of 1980’s ambiance. 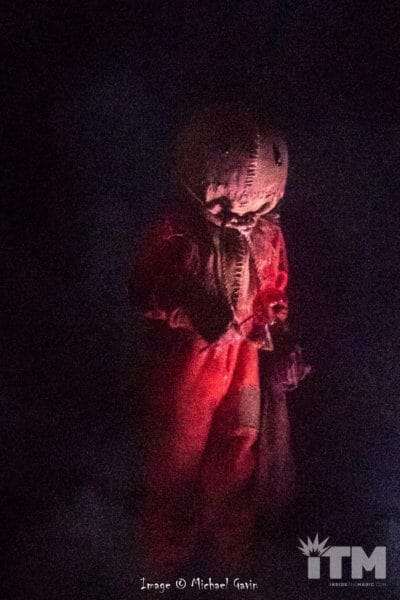 Sam is back with his own haunted house after a successful run as a scare zone last year.  Several of the same scenes made the journey with him.  In an amazing feat of haunt magic, Universal’s creative team managed to make this indoor maze feel more like an outdoor adventure than last year’s outside version. 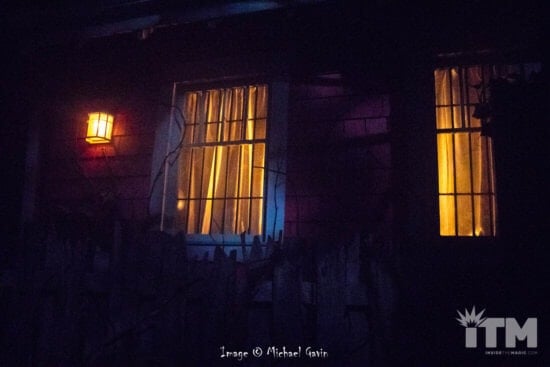 Fantastic full-size sets, frightfully familiar scenes and an outstanding offering of orange clad Sam himself will delight fans of this terror filled tribute to the traditions of the season.  A spooky stroll through the world of “Trick ‘r Treat” delivers well stocked scares and startles along with wonderfully crafted ambiance. Just don’t break any of the rules of Halloween.

“Stranger Things” “Halloween Horror Nights™ takes you deep inside the haunting world of Netflix’s STRANGER THINGS. The Demogorgon is hunting in our world now.” – Universal 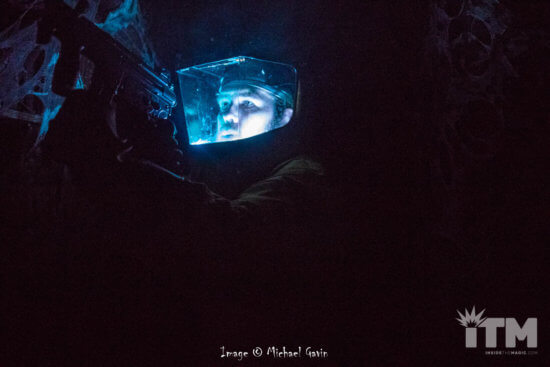 Fans turned the internet upside down upon learning “Stranger Things” would be materializing at this year’s Halloween Horror Nights.  They were not disappointed.  Partnering with Netflix, Universal brought Hawkins to life, complete with several season one scenes from runaway subscription show.  Eerie effects bring guests into the upside down as the Demogorgon descends seemingly from every wall and shadow in this well-crafted haunted house. 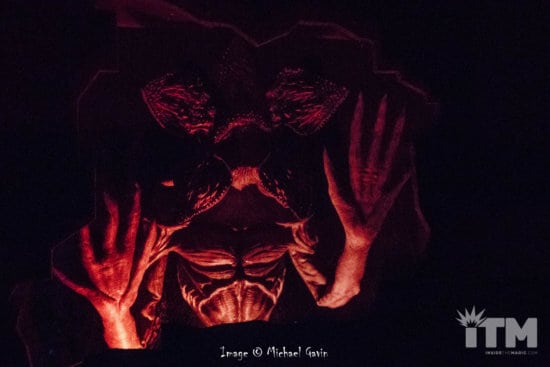 “Poltergeist” “Restless spirits have overrun the infamous house atop a cemetery and will lure you into a place between life and death. Don’t get lost in the light.” – Universal 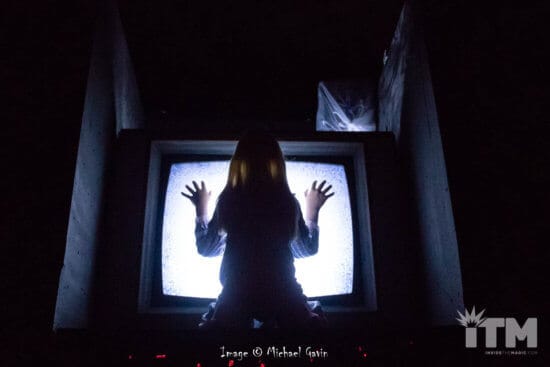 “They’re here!” Tobe Hooper stepped in to direct this Steven Spielberg written/produced paranormal masterpiece in 1982.  This haunting ghost story provoked children of the eighties to check under the bed and leave the closet light on at night.  Halloween Horror Nights recreated this nostalgic nightmare with perfect accuracy, even taken the story beyond that of the famous fear film. 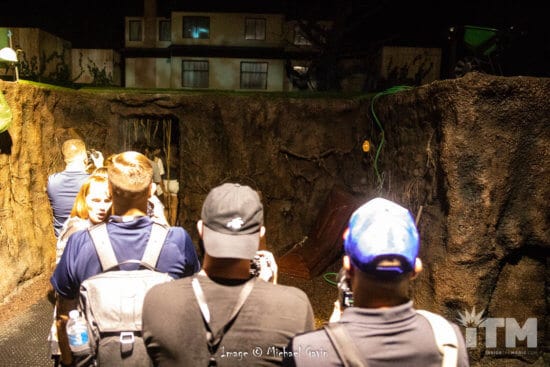 In an act of sheer brilliance, the haunt begins at the film’s finish, by entering through the coffin riddled former cemetery that was to become the Freeling’s family swimming pool. Emerging from this underground burial ground into the family kitchen to witness paranormal pandemonium as only a poltergeist can produce. 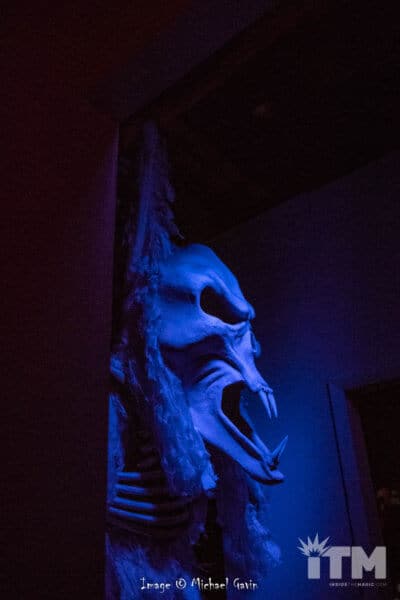 The creepy cool creative minds crafting this spirited haunt take the spooky story a step further. Adding to the nightmare, we follow Carol Anne into the light to traverse a realm of surreal surprises.  Taking this extra step further fuels the fear by taking guests into an ethereal element that’s true to the story. Thus allowing for unsuspected screams and splendidly sinister story telling. 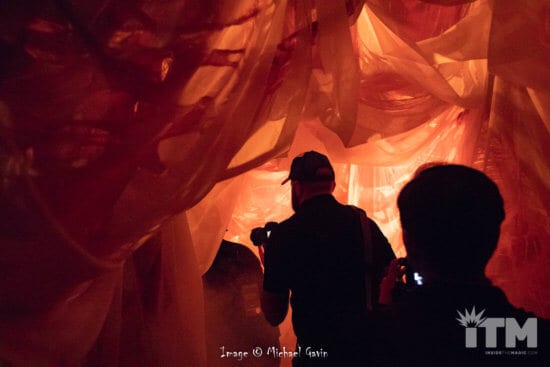 “Poltergeist” is worth the wait, evoking memories of childhood fears, stoking the embers of coulrophobia (fear of clowns), perhaps the ultimate film to fear factory transformation that Halloween Horror Nights has undertaken (pun intended). 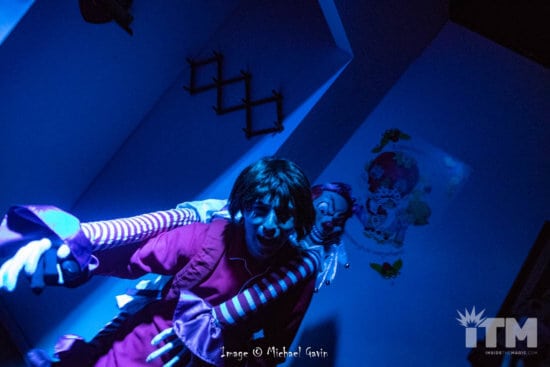 While other IPs have been masterfully manufactured at HHN, “Poltergeist” is, perhaps, the perfect storm for best IP ever.  Easily a strong contender for “house of the year!”

A quick consult with YouTube fear finding phenomenon “The Dead Girl” confirms what many are feeling about this amazingly haunting recreation:

“Poltergeist stole my heart, and is my top house at HHN28. From Fantastic scenic to great creatures and scares, no other house gave me what Poltergeist did. It fully immersed you and held even the smallest of details like the food sliding across the counter in the kitchen. This house had everything.” 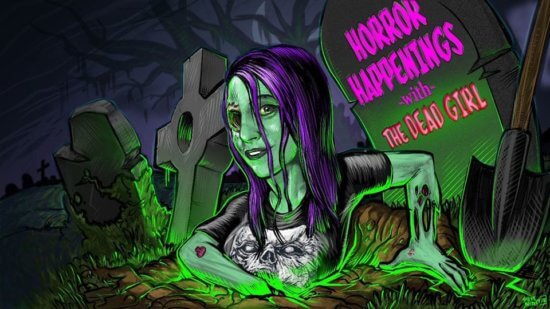 Intellectual properties recreated as haunted houses can be tricky.  A poor representation or interpretation can easily yield a fright flop.  Not to fear (or is that everything to fear?), the ghostly gurus at Universal Studios have once again knocked out of the proverbial park with this year’s quintet of famous fright franchises.   Expertly using the eighties as a backdrop, Horror Nights taps into the childhood fears and favorites, further showcasing why Universal Studios can easily be crowned the king of haunted houses (hint: it doesn’t hurt that the company found its footing with the classic monster movies of the 1930s- 1950s). 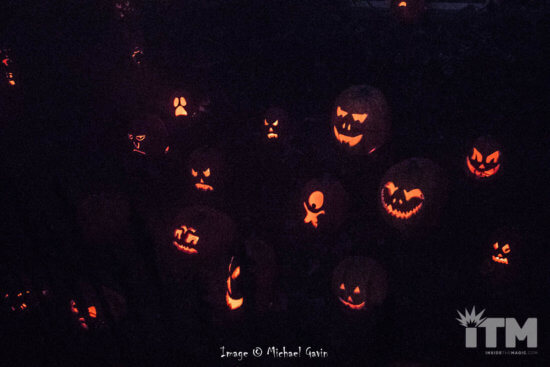 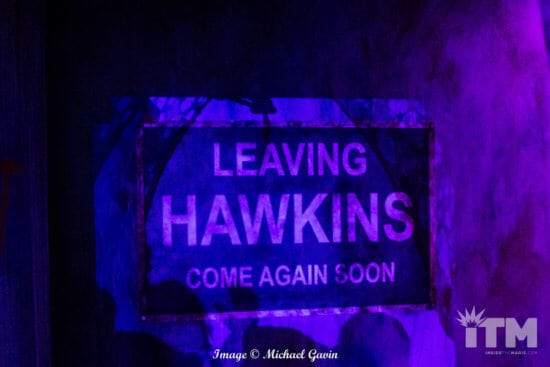