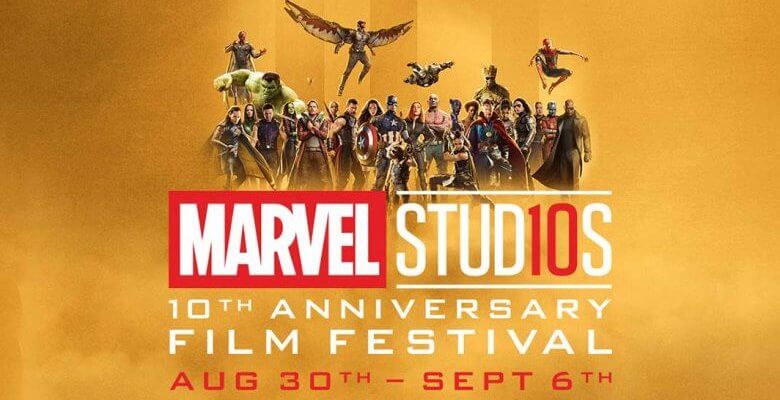 Marvel fans assemble! Everyone’s favorite films from the first 10 years of the Marvel Cinematic Universe are coming back to theaters on IMAX screens across the U.S. and Canada from August 30–September 6 in celebration of The Marvel Studios 10th Anniversary Film Festival.

Marvel has been bringing super hero fans from around the world to theaters for the past 10 years and now the company is celebrating with The Marvel Studios 10th Anniversary Film Festival. This mega movie marathon will show all 20 Marvel films exclusively in IMAX over five days during matinee, late afternoon, prime and evening show times.

The super event will begin with “Iron Man” on Thursday, August 30 and finish with a film chosen by Marvel fans on Thursday, September 9.

The entire schedule for the event is featured below. 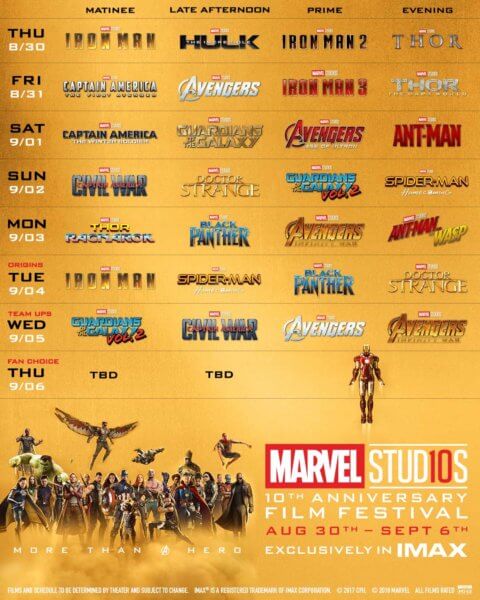 The first five days will show all 20 films in release order, followed by two themed days focusing on “Origins and “Team Ups.” The festival will conclude on the morning of September 6 with two films chosen especially by the fans.

Marvel is calling for fans to team up with their friends to vote and choose only their favorite films for Thursday, September 6. Choices will include “Iron Man,” “The Avengers,” “Captain America: The First Avenger” and “Black Panther.”

Voting is open now though August 17 on Twitter @IMAX and @MarvelStudios. Be sure to vote, share and tag #MarvelStudios10FilmFestival in all of your social media votes.

Below is the official announcement for the event by IMAX.

It’s the 10th Anniversary of @MarvelStudios and we’re celebrating. For the first time ever, you can experience all 20 films from the MCU, only in IMAX. Secure your seat: https://t.co/uSgd30TFqL pic.twitter.com/lopaGKV6Qh

Tickets for Marvel Studios 10th Anniversary Film Festival are available now and can be purchased on Fandango.com.