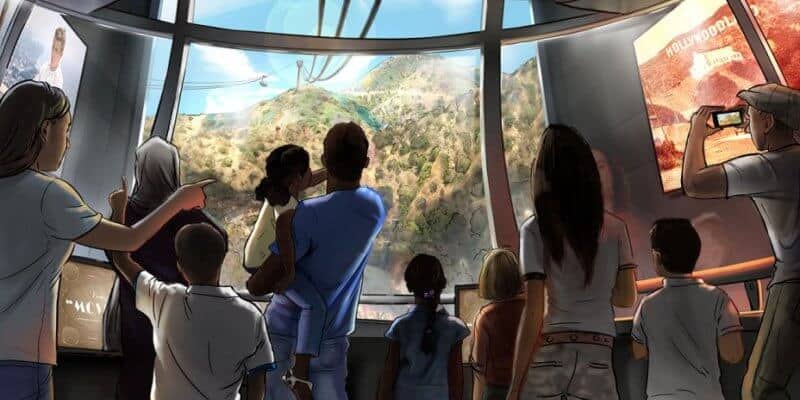 The Warner Bros. Studios lot in Burbank, California has been in operation since the late 1920s, making the renown Hollywood-adjacent landmark almost a century old. Many of the most famous movies in history were produced on its campus, and to this day it serves as a popular tourist destination for film fans visiting Los Angeles.

Similarly, the instantly-recognizable Hollywood Sign looming over the opposite side of the Hollywood Hills, has drawn countless visitors since first being unveiled (originally as “Hollywoodland”) in 1923. Now a new project launched by Warner Bros. is set to link these two iconic Tinseltown landmarks.

Today Warner announced its proposal for a $100 million tram-style gondola lift called the Hollywood Skyway that would transport guests from the Burbank movie lot up to the Hollywood Sign in six minutes over a route consisting of more than a mile each way.

“The Hollywood sign is an important historic and globally recognized landmark for the city of Los Angeles. The sign’s fame, however, has created unintended negative effects such as heavy traffic in adjacent residential areas and related safety concerns,” a Warners spokesperson said in a statement. “The concept of an aerial tram as a solution is one that been suggested in the past and was most recently highlighted as a potential solution – an option that can be built and operated at no cost to the taxpayer and that will provide public benefit to the city of Los Angeles and its residents.”

According to a story in The Hollywood Reporter, the Hollywood Skyway would take about three years to build. The project is pending approval by officials representing the city of Los Angeles.