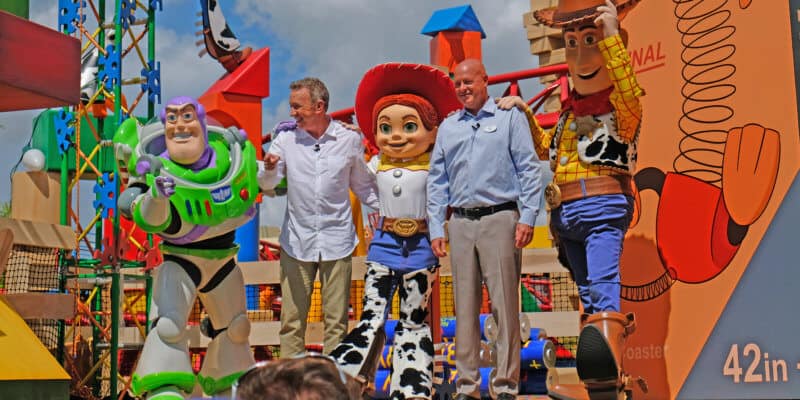 Toy Story Land officially opens at Disney’s Hollywood Studios tomorrow and to celebrate its opening the park held an official dedication ceremony this morning. The special event marked the official opening of the land and was officiated with the pull of a crayon lever by both Chairman of Disney Parks Experiences and Consumer Products Bob Chapek and Buzz Lightyear himself, Tim Allen!

The ceremony began with a special entrance by a group of Green Army Men who scaled down the stage walls to pull down a curtain, revealing “Toy Story” characters Buzz Lightyear, Woody, and Jessie.

At that point, Chapek took the stage. Chapek then attempted to pull a crayon lever by himself to mark the official opening, but ultimately lacked the “power” to do so. The first attempt to remedy this issue was by the Green Army Men who delivered a bunch of batteries to the stage.

After the Green Army Men’s attempt, Chapek said “it’s still not enough” and then suggested they use “star power,” which led to the announcement of Tim Allen’s arrival.

See the full ceremony in the video above, and be sure to check out Toy Story Land for yourself when it opens in Disney’s Hollywood Studios tomorrow at Walt Disney World in Orlando, Florida. For more information, be sure to visit the park’s official website.