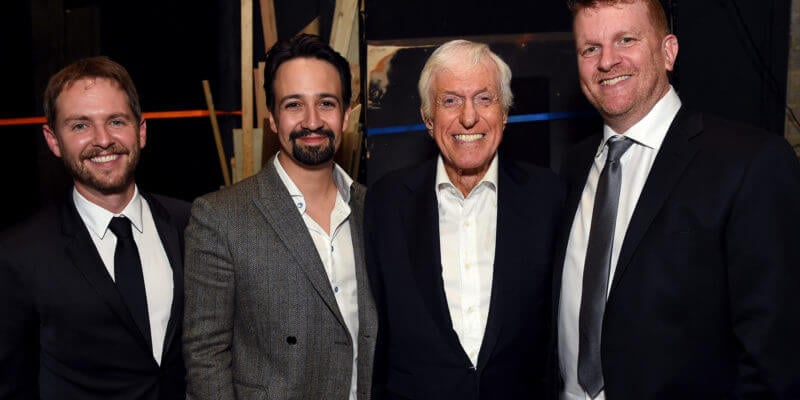 On Sunday, May 20, Disney favorites Dick Van Dyke and Lin-Manuel Miranda were honored during the “Backstage at the Geffen” fundraiser at the Geffen Playhouse in Los Angeles.

The star-studded event raised more than $1 million to benefit arts education programs and new play development. During the event, Jim Carrey presented the Distinction in Theater Award to Van Dyke and Rita Moreno presented the Education Impact Award to Miranda.

Fellow Disney stars also performed during the fundraiser. Billy Crystal (Monsters, Inc.) spoke of his life-long love of theater, while Kristen Bell (Frozen) sang “More Than Just a Spare,” a song written for, but ultimately cut from the animated film.

“My heart is totally full and I’m totally speechless. Speechless is weird for me. That doesn’t happen often,” said Lin-Manuel Miranda as he accepted his award. He also paid tribute to fellow honoree Dick Van Dyke during his speech.

Dick Van Dyke, at 92-years-old, joked about his early days as a comedian and his hopes of doing more theater before asking his a cappella group, The Vantastix, to join him for a Mary Poppins medley. After lively versions of “Supercalifragilisticexpialidocious” and “Step in Time,” he closed the show by inviting all of the evening’s artists, including Miranda, and guests to accompany him onstage for an impromptu sing-a-long of “Let’s Go Fly a Kite.”

Van Dyke and Miranda both appear in Disney’s upcoming “Mary Poppins Returns,” a follow-up to the beloved “Mary Poppins.” Miranda shared this fun photo on Twitter, while Kristen Bell shared her own picture with Van Dyke on Instagram.

My makeup was only half done and I only had one earring in- but when dick van dyke wants to take a picture, nothing else matters.

Mary Poppins Returns, starring Lin-Manuel Miranda, Dick Van Dyke, and Emily Blunt as Mary Poppins, arrives in theaters on December 25. To learn more about the Geffen Playhouse, head over to their website.