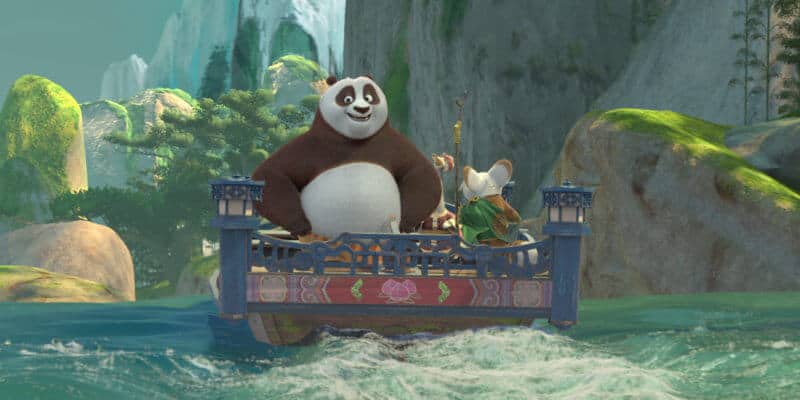 Skadoosh! “Kung Fu Panda” has arrived at Universal Studios Hollywood in a big way: with a new show-based attraction that will “take guests on a thrilling journey that fuses captivating storytelling with state-of-the-art visual effects.” “Kung Fu Panda: The Emperor’s Quest” is the premiere feature for Universal’s gorgeous and all-new DreamWorks Theatre, built in Mission revival architectural style reminiscent of Hollywood’s golden age.

Last week a select group of media was given an advance tour of the DreamWorks Theatre and an enlightening behind-the-scenes look at “Kung Fu Panda: The Emperor’s Quest,” hosted by Universal Studios Hollywood Creative Studios Senior Director and Executive Producer Jon Corfino, and we came away from the experience extremely excited to see the finished show. 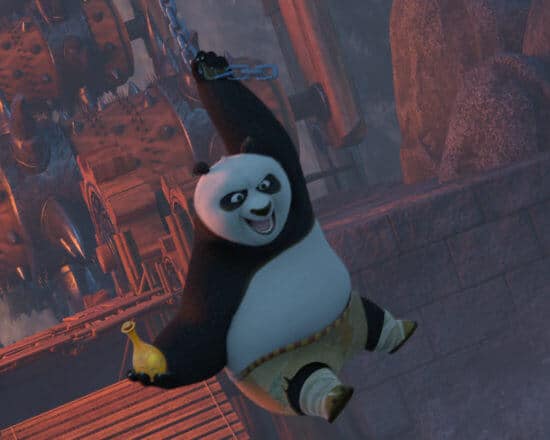 The DreamWorks Theatre entrance is marked by a small box office across from Universal Plaza. Inside the booth rests a three-dimensional figure of Pinocchio from “Shrek.” “He will be asleep muttering some very funny lines as we enter,” Corfino told us. Beyond the ticket booth lies an enchanting outdoor garden, a marked difference from the “Shrek 4-D” queue that had previously occupied this space. “The challenge with this particular location before was that it didn’t have a formal entrance. That was the whole reason for reorienting [the courtyard] and creating this monument approach.”

Looking up at the new building that houses the DreamWorks Theatre, it was difficult not to be impressed with the style and feel of the structure. We were told that the design was inspired by the DreamWorks Animation campus in Glendale California, as the theater will serve as the permanent headquarters of DreamWorks’ characters in the park. 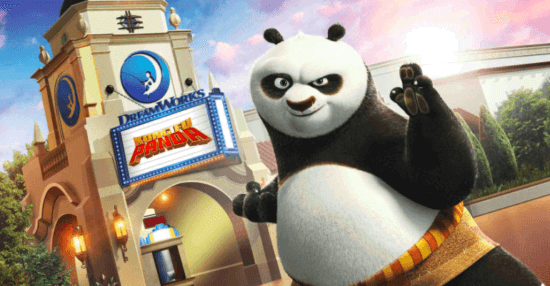 “[It’s a] brand-new theater, inside and out,” said Corfino. “After you go through this, you’ll realize that everything inside has been completely redone. We really geometrically changed everything, the levels of the theater, so there’s really nothing here that exists from before. This is a completely brand-new venue except for the outer walls, by and large.”

Next we moved on to the “Kung Fu Panda: The Emperor’s Quest” pre-show area. “In this area, we’re actually introduced to something you don’t see every day, which is a lot of the DreamWorks characters interacting with each other. They come [out] and say, ‘Welcome to the Shrek show.’ And then the folks from ‘Madagascar’ come up and say, ‘No, it’s our show.’ [Its] goes back and forth and finally Po comes in and says, ‘No, this is Kung Fu Panda’s show.’ And then he’s interrupted by his father, who’s got an urgent message from the emperor. He’s got to deliver this ball of ultimate power, and he’s going to need some help.” 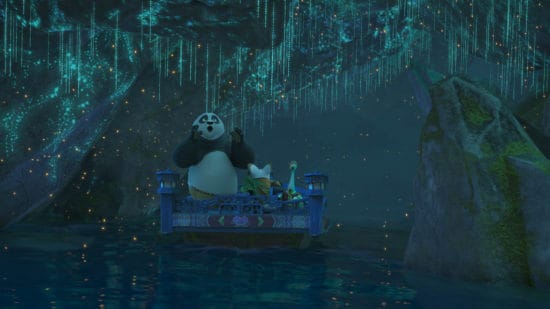 Finally, we entered the DreamWorks Theatre auditorium itself, equipped with plush, fully-articulated pivoting seats, seven Christie 4K projectors and 360-degree surround sound audio. Universal also promises sweeping physical effects such as splashing water and gusting wind. “This whole show is all about trick-of-the-eye and putting you in a very immersive and transformational theater space.”

When guests first enter the space, they’ll be convinced they’re in an upscale theater environment, but as the show goes on, they’ll soon discover the room around them isn’t quite what it seems. “We’ve all seen video mapping outside, and the key there is you’ve got to be very geometric in your approach. You take measurements after the building’s already done, then you create your media from that. In our case, we had to create the show trying to be a transformational space, and had to [experiment with] exactly what it would take to do that.” 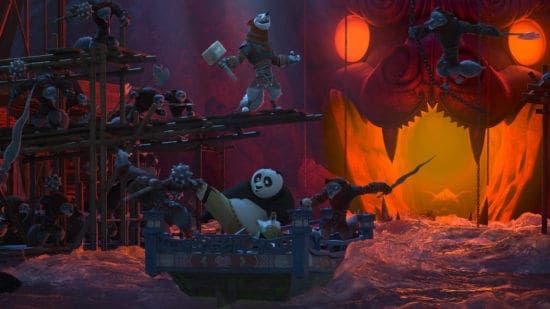 “The show starts with [the curtains] opening up, and as we go through the experience, slowly but surely a couple things start to come out into the theater with us and create that illusion of immersion. And then at one point, when Kang appears with the Ming Hammer, he slams the ground and the entire theater explodes, and we’re transported to the Spirit Realm. It’s a really cool scene. And then at the very end, we’re transported back to the emperor, and at the very end of the show, the theater completely rebuilds itself in front of our eyes. It’s very dynamic.”

Jon Corfino does have one piece of advice for fans heading to Universal Studios Hollywood to check out “Kung Fu Panda: The Emperor’s Quest” in the DreamWorks Theatre, so take it from an expert: “The best seat in the house is probably in the back.” 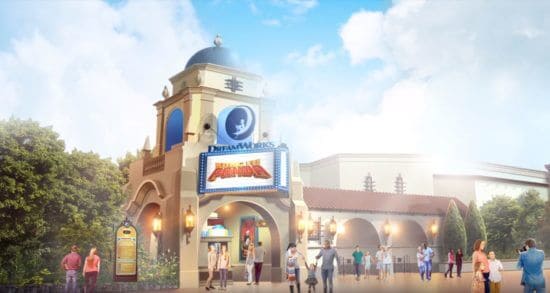 Comments Off on Behind the scenes of “Kung Fu Panda: The Emperor’s Quest” at Universal Studios Hollywood’s new DreamWorks Theatre