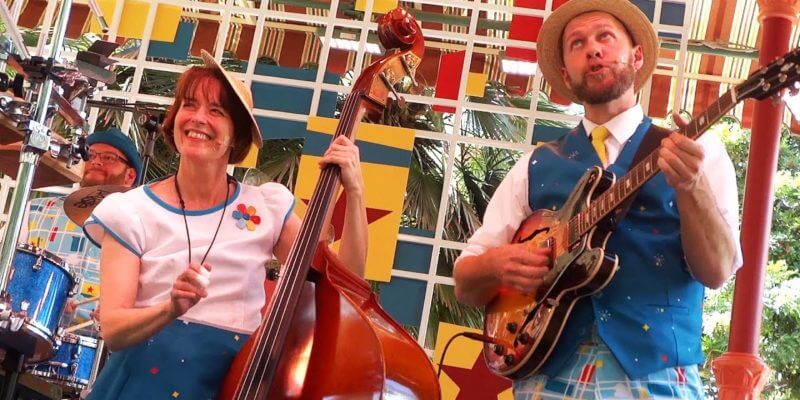 Pixar Fest kicked off at Disneyland Resort on Friday, April 13, becoming the biggest Pixar celebration ever to come to Disney Parks. We’ve shown you lots of fun with our Pixar Fest coverage, and now it’s time to focus on the delightful music for Pixar Fest.

At Disney Calfornia Adventure, a zany new seven-piece band called TripleDent Gum presents The Pixarmonic Orchestra performs songs from Pixar films. Fans of Disney-Pixar’s “Inside Out” will recognize TripleDent Gum as a running gag from the movie, and of course, the jingle pops up a few times during this performance.

During the 15-minute show, the band also performs “The Spirit of Adventure” (Up), “If I Didn’t Have You” (Monsters, Inc.), the credits song from “The Incredibles,” and “You’ve Got a Friend in Me” (Toy Story).

Over at Disneyland Park, the Dapper Dans contribute to the music for Pixar Fest with their own barbershop style. In this video, the quartet sings “You’ve Got a Friend in Me” from “Toy Story.”

WATCH – DAPPER DANS PERFORM “YOU’VE GOT A FRIEND IN ME” UNPLUGGED DURING PIXAR FEST AT DISNEYLAND:

Pixar Fest runs at Disneyland Resort through September 3. Visit the Disneyland website for more information, and for more of our Pixar Fest coverage, click here.