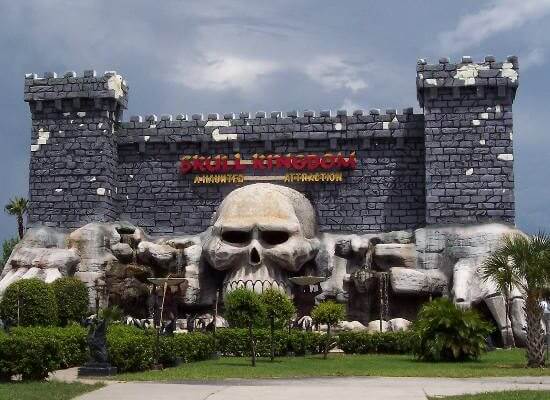 There are two main “tourist” avenues in Central Florida:  US 192 in Kissimmee (Walt Disney World area) and International Drive in Orlando (near Universal Studios Florida). Both roads are ripe with souvenir shops, smaller attractions and places to eat.

Over the years, since Disney and Universal set up shop in town, numerous businesses have come and gone. Some for the better, but many are missed. Below is a list of 7 International Drive  (I-Drive) extinct experiences that we miss the most. Before Walt Disney announced and established his Florida Project, the land near Interstate 4 and Sandlake Road was pretty much swampland. The defense contractor Martin Company (now known as Lockheed Martin) purchased a large swath of the swamp for a Florida based factory in 1956. This was the beginning transformation from rural swamp and farmland to the commercial/tourist area that is International Drive today. The first hotel in the area was built a year before Disney opened its doors to the south. Visitors traveling Interstate 4, on the way to Walt Disney World, would have to exit on Sandlake Road and traverse another dirt road to get to the hotel. Eventually, that road was paved and named International Drive. Sea World arrived in 1973, at what was then the endpoint of International Drive. Sea World’s co-founder, George Millay, left the theme park to establish what is considered the first water park in the world, Wet n’ Wild (1977).  Situated at the corner of Republic Drive (now Universal Boulevard) and International Drive, Wet n’ Wild served as another anchor to the developing tourist corridor.

Harris Rosen arrived in 1974. He and partners purchased a small Quality Inn at a time when travel to Orlando was threatened by gas shortages. Today there are several Rosen properties along International Drive.

International Drive was eventually extended to give access to the Beeline (now Beach Line) Expressway. This expansion, intended to lead to a more upscale region, was originally conceived as Plaza International. It was anchored, in 1983, by the Orange County Convention Center and Civic Center. This Central Florida venue served as a concert venue as well as a convention center for the area. The arena was closed and absorbed into what is now known as the West Concourse and the Orange County Convention Center (spanning both sides of International Drive) is the second largest convention center in the country. As mentioned above, this grand-daddy of a water park was established in 1977. Wet n’ Wild kept guests cool for almost 40 years. Millay sold the Orlando location to Universal Parks and Resorts in 1998. The water-based adventure would remain open until the end of 2016. Many of the attractions were moved up the street to Universal’s Volcano Bay, which opened a year later.

Just past Oakridge road at the end of International Drive is a discount shopping mecca now known as Orlando International Premium Outlets. Belz Factory Outlet World opened in 1981 as an indoor shopping experience. The mall had a food court and spanned 80 acres just off Oakridge when it first opened. A second indoor collection of stores was added in 1984 and I-Drive was expended to end at the mall. Prime Outlets acquired the mall and nearby strip malls associated with the Belz property in 2006 and remodeled it into an outdoor “lifestyle center” in 2007.

International Drive witnessed the arrival (1986) of a royal feast celebrating the birthday of King Henry VII. Featuring sword fights and other medieval themed entertainment, King Henry’s Feast took place twice a night within the castle on International Drive. Unlimited beer, wine, and soft drinks accompanied chicken and ribs. All of which was delivered by serving wenches to the partiers seated at long tables. Unfortunately, the festivities came to a close in 1999 and the location eventually became an Olive Garden.

For me, personally, the best memory of the dinner attraction was enjoying the annual Klingon Feast coordinated by a local Star Trek fan club. Imagine a bunch of rowdy Klingons with access to unlimited beer.

With a giant skull-shaped façade marking the entrance to this haunted castle, a brand new haunted attraction arrived in Orlando (1993). Skull Kingdom enjoyed a reign of horror just south of Kirkman Road, on International Drive and American Way. The two-story haunted attraction was named one of the Dark Ride and Funhouse Enthusiasts organization’s top 10 walkthrough attractions. Skull Kingdom haunted visitors until November 2006.

Just behind Skull Kingdom, further down American Way, was Malibu Grand Prix. This formula one style racing attraction was also home to mini golf, batting cages and castle housed arcade. All of this was, sadly, was demolished in 2000. The valuable International Drive area land that once hosted this family fun destination is now the location of a Homewood Suites hotel.

While the tag at the end of this video is for another location, the Orlando experience was pretty much the same.

Point Orlando, at the corner of and I-Drive, brought an Imax movie theater, retail and restaurant locations to the area. One of the original anchors of this two-story outdoor destination was FAO Schwarz. During its tenure (1997-2004), the upscale toy seller would prove a perfect place for perusing the latest and greatest playthings and a great way to pass the time while waiting on the movie theater to open.

Towering above neighboring Orange County Convention Center, the Peabody hotel came to Orlando in 1986. The upscale I-Drive inn expanded to add another tower in 2010, bringing a total of 1641 rooms to the 32 story site.  Peabody Orlando was the second incarnation of Marty Belz (yes, same Belz of the Factory Outlet World) hotels, the first being in Memphis, TN.

Listed above are just several of the many experiences that have come and gone on Orlando’s tourist highway: International Drive. Other adventures include Pirates Dinner Adventure, Mercado, Movie Rider and Star Trek the Experience. The seven stated above just happen to be personal favorites.

What do you miss most from the many delightful diversions formerly found on Central Florida’s International Drive tourist corridor?  Please share your memories in the comments below.