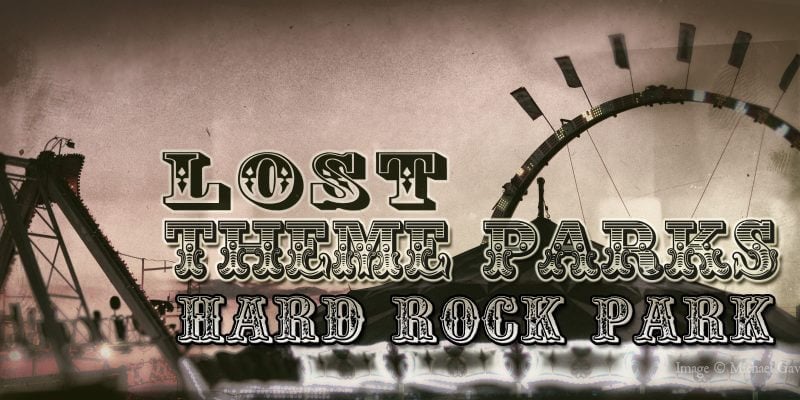 On April 15, 2008, rock and roll was supposed to have a permanent place among the world’s amusement parks.  Hard Rock Park (later Freestyle Music Park), had hopes of becoming that tribute when they opened in Myrtle Beach, South Carolina.

The sensational sound spectacle was home to over 50 musically motivated attractions, including a very trippy dark ride and five roller coasters. Sadly the music inspired experience only lasted for two seasons.

Announced in 2007 and built at a cost of over $200 million, the theme park took about a year to build.  The Hard Rock name appeared at a cost of $2.5 million per year in licensing fees.  Legendary bands were idolized in name and song as attractions within the six themed areas of Hard Rock Park (All Access Entry Plaza, Born in the USA, British Invasion, Cool Country, Lost in the Seventies and Rock & Roll Heavan). Rock superstars The Eagles along with The Moody Blues participated in ushering in the new entertainment experience, performing at the park’s 10,000 seat amphitheater. Attractions like Led Zeppelin: The Ride (a 65mph roller coaster with seven inversions) which featured classic songs from the band, Eagles Life in the Fast Lane (another roller coaster), and Nights in White Satin: The Trip became instant hits.

Another brilliant entertainment venue, “Phonehenge” showcased the talents of Lukas Dudek. His fire eating, swordplay and juggling show was performed within a circle of telephone booths set up to resemble Stonehenge. For children of all ages, Saturday morning superstars, “The Banana Splits” served up comedy and nostalgia as part of their appearances at Hard Rock Park. Unfortunately the housing bubble burst in 2008 and fuel prices soared, bringing about the beginning of financial difficulties for the new Hard Rock Park, forcing it to cut its first season of operation short and ultimately close its doors in September of 2008.

The park and its amusements were sold and rebranded. New owners felt changing names of both the park (to Freestyle Music Park) and its attractions would help add distance from Hard Rock Park’s failure and avoid issues with various concepts still held by the original owners.  Freestyle Music Park was also revamped to make the experience more family friendly. The Eagles themed coaster became known as “Iron Horse,” Led Zeppelin the Ride turned into a trip down rock history known as the “Time Machine.”  The psychedelic dark ride based upon the Moody Blues hit transformed into “Monstars of Rock.” The game room kept its overall theme, becoming “Who’s Tommy Arcade.”

Freestyle Music Park also offered their own version of an over the top nightcap.  The neon framed iconic guitar maintained its role as a show centerpiece, as part of the “Kiss the Sky” fireworks, fountain and laser light show.

Fans of NBC’s post apocalyptic science fiction series, “Revolution,” might recognize the theme park as it was featured in an episode the two season show. Unfortunately the changes weren’t enough to keep Freestyle Music Park afloat.  Legal troubles and further financial troubles forced Freestyle to close after only being open for one season.  Sadly employees were dismissed before the 2010 season and the park was foreclosed upon.  It would not open for the 2010 season.  Eventually all the attractions were removed and relocated or demolished by 2015.