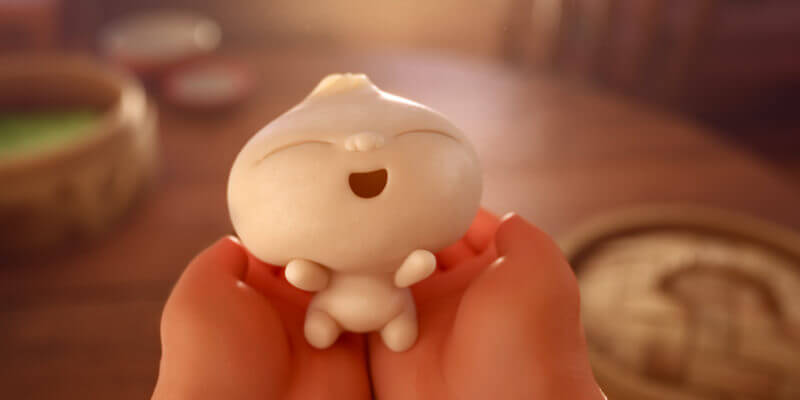 Since its second feature “A Bug’s Life” in 1997, Pixar Animation Studios has– almost invariably– paired its movies with an instantly-acclaimed and often beloved animated short. After an irregular (and somewhat controversial) deviation from that trend last year, fans will be glad to find that the highly-anticipated upcoming sequel “Incredibles 2” will not be an exception to the rule.

During a recent visit to Pixar’s headquarters in Emeryville, California, I was shown the wonderful new short “Bao” and then had the opportunity to sit down with its director Domee Shi and producer Becky Neiman. During our interview, we talked about the Pixar shorts tradition, the origins of “Bao,” and why diversity of experience is so important in generating the studio’s consistently excellent output.

Inside the Magic:  The last Pixar feature did not come paired with a Pixar short– Disney Animation’s featurette “Olaf’s Frozen Adventure” received a mixed reaction playing in front of “Coco.” What are your thoughts on why it’s important to stick to the tradition of having a Pixar short and a Pixar feature programmed together?

Domee Shi:  It’s a legacy and we want to continue!

Neiman:  The first thing that this studio did was a short film, and so there’s something really magical about this tradition carrying on and audiences coming to look forward to that.

Shi:  It’s like a little surprise before the feature. I’m definitely supportive of it continuing in the future. I also think shorts are awesome at Pixar in that they’re great testing grounds for future leadership, but also testing grounds for weird, interesting ideas that people might not want to take a chance on in a feature film. For “Bao,” there [were] a lot of interesting ideas that we were able to try because it was in the short film format. I think it’s awesome.

Neiman:  Yeah, it’s a perfect way for us to try on these new leadership roles, really experience the whole pipeline but on this smaller scale, but yet still held to the level of excellence that Pixar has.

Shi:  And we get to try interesting stories. We get to take more chances, which is really cool.

ITM:  Along those same lines, why specifically made the studio feel that “Bao” fits alongside “Incredibles 2”?

Shi:  It was kind of a happy accident that we were paired with “Incredibles 2” because as we were making the short, we were just focused on getting it done. Whatever film was going to come out at the same time that we were finishing, we were going to get paired up with. So it was kind of awesome that “Bao,” a short about this mom, is paired with “Incredibles 2,” which celebrates Helen [Parr], this super-mom.

Neiman:  At the start of production we had no idea. It’s all about timing. The shorts program is sort of this scrappy indie wing of Pixar. We try to make these things in between these big feature productions. We’ll sometimes have to start and then stop and wait for artists to become available. So we really had no idea when it might be completed, and then when we found out we were attached to “Incredibles 2” we were overjoyed.

ITM:  You mentioned some of the bold choices in “Bao.” I enjoyed seeing some themes that I hadn’t seen tackled by Pixar before. Can you talk about pushing the envelope in that way?

Shi:  I was hesitant to even pitch it at first, because I was like, “Is this too dark and weird for Pixar to do?” But that was actually the reason why Pixar picked it, was because it was so unexpected and surprising.

Shi:  So that really encouraged me right from the start. “They like this because it’s weird and different. I’m just going to fully embrace that and just put as much weird stuff as possible in there.”

Neiman:  You’ve talked about your inspiration with fairy tales.

Shi:  Yeah, I was looking at “The Gingerbread Man” and I’m like, “That’s kind of dark.” Everyone wants to eat him. And because Pixar is part of Disney, and Disney is always drawn from fairy tales too, this isn’t too far from what they normally go for. It’s maybe a little bit more different, but the essence is still there. It’s a retelling of a familiar fairy tale.

Neiman:  We also feel like the themes are universal. Anybody can relate to a story about family and being brought together with food.

ITM:  I’m fascinated by the psychological idea of food as a character that you love, and of parents and grandparents wanting to ascribe edible qualities to their offspring (“I want to eat you up.”) Where do you think that comes from?

Neiman:  Did somebody just tell us? There’s something biological, right?

Shi:  I was reading some online news article where they say that when you’re staring at something really cute, the same synapses in your brain are firing off as [when you experience] feelings of violence. If I look at a really cute kitten, I just want to eat it up. I just want to squish it until it can’t breathe. I don’t know why, it’s just this feeling that everyone seems to have around cute things. That was definitely one thing I wanted to explore in the short. When you see something so cute, you just want to eat it.

Shi:  Yeah, it’s just like a fun, weird, but real and universal feeling that I think a lot of people can identify with. We’ve shown it to moms, and they’re like “Oh my god, it’s so true! I do want to eat my kid. I do.”

ITM:  You drew a lot from your own life in creating “Bao,” but when does it start to feel like it’s getting too close to reality? And when do you decide you want to change something? Obviously the dumpling character is a boy, not a girl.

Shi:  Having the dumpling be a boy probably [made it] easier for me to detach myself from it emotionally. I’ve always pictured the dumpling to be a boy. When I first had this image in my head, it was of a Chinese mom nuzzling this little dumpling boy. I think that helps because it separates me from the story a little bit. I can draw from my own experience, but then I don’t have to look at myself every single day on the screen. So I can make those creative decisions and kill those creative babies.

Neiman:  Do what’s best for the story.

Shi:  Yeah, and look at it more objectively, if it’s not a one-to-one reflection of my life.

Neiman:  Totally. And your main character is mom. You wouldn’t want to be distracted.

Shi:  Yeah, I wouldn’t want to be focusing so much on the dumpling’s journey. If the dumpling was me, then I would zero in on the dumpling. But I really wanted the main character to be the mom.

Neiman:  That was Domee’s direction, through and through, down to when we were scoring. That was what she would say to the composer– it needs to sound like how mom is feeling right now.

Shi:  And it helps because I’m not a mom, but it was a fun challenge to put myself in the shoes of a character that I’m not familiar with being.

ITM:  Has your mom had a chance to see the finished short yet?

Shi:  She hasn’t. She’s only seen an early storyboarded version of it. But she’s really excited and happy that she can brag to all her friends about it. [laughs]

Neiman:  And she was a big part of the making [of the film]. She was our cultural consultant. She came down and taught us how to make dumplings.

Shi:  And she’s coming to the wrap party. We’re real excited about that.

ITM:  Pixar’s output has reflected a variety of different cultures– from the Mexican traditions of “Coco” to Indian Hindu heritage in “Sanjay’s Super Team,” and now the Asian immigrant experience in “Bao.” Why is diversity of experience so important in the company’s filmography?

Shi:  I think if we’re going to keep innovating and we’re going to keep wanting to tell different stories and not bore people with the same stuff, then we should tap into diverse storytellers. They’re going to be drawing from experiences that we haven’t drawn from. It’s this well that we haven’t tapped yet, and there [are] so many cool new ideas in there. I think it’s better for the studio creatively if we continue to do that, which we are. [It’s] awesome.

ITM:  What do you hope audiences take out of this film?

Shi:  I hope when audiences watch it, they can identify with it a little bit and then use food to connect to people in some way afterwards. Food brings people together. It’s a great way to apologize to someone, present good news or bad news. It’s a good social lubricant.

I always say that I just want audiences to do two things after they finish the short– call their moms and invite them to lunch.

Get a taste of #Bao, our upcoming short opening ahead of #Incredibles2 June 15. pic.twitter.com/Yw17N2pNZX

“Bao” will play in front of Disney/Pixar’s “Incredibles 2” when it opens nationwide on Friday, June 15th.