“I have need for you on the master’s sail barge…” Star Wars toy collectors have something to celebrate today, as Hasbro announced its enormous, four-foot-long collector’s item playset reproduction of Jabba’s Sail Barge from “Return of the Jedi” has reached its backer goal at HasLab.

We’re beyond excited to officially announce the biggest Star Wars Vehicle Hasbro and Kenner have ever produced – Jabba’s Sail Barge (The Khetanna) – will go into production!! This premium, 4-foot long collector’s item is available through Hasbro’s new platform, HASLAB, and has exceeded its preorder threshold by almost 3,000 additional backers.

#ad Like I told Jabba — this is your last chance! #BackTheBarge, or you’ll regret it! Only 1 day left to support #HasLab & add this incredible vehicle to your collection. You don’t want to be the next #SarlaccSnack! Find out more info at Hasbro.com/HasLab @hasbro

If you haven’t gotten on board Jabba the Hutt‘s most impressive desert vehicle yet, there’s still a chance! “Today’s the last day for Star Wars’ biggest fans to be a part of this campaign and preorder their very own Jabba’s Sail Barge.” 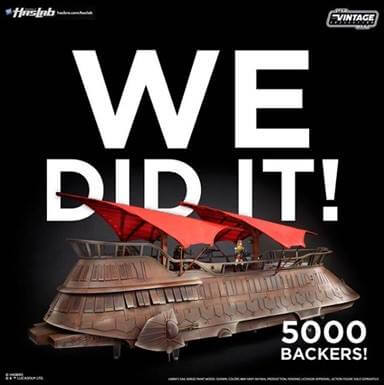 For more information and to make a pledge today, visit HasLab’s official website.