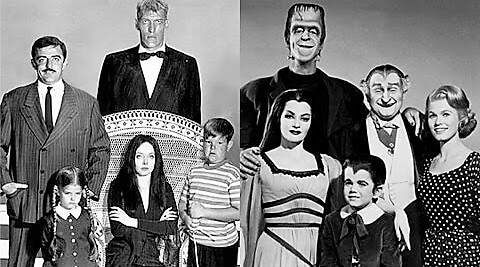 It seems the reboot robot’s rampage runs amok in Hollywood again. This time the revisualization revamp raids a pair of 1960’s spooky sitcom icons. Both “The Addams Family” and “The Munsters” could be reincarnated yet again.

Both franchises have experience with life after death. While the Addams family has seen a pair of near perfect films, a pair of cartoon series and a Broadway production, other franchise follies have probably caused Charles Addams to turn in his grave.  “The Munsters” has also seen its share of reboots, though none have realized any semblance of success. Adventures with the Addams’

Keeping the spirit of the family alive, Raul Julia and Anjelica Huston recreated the role of Gomez and Morticia for two fiendishly fun feature films. “Addams Family” and “Addams Family Values” (1991 & 1993) brought to un-life several of Charles Addams’ macabre moments and gave Paramount Pictures a pair of box office hits. A third film was planned but canceled, sadly, due to the untimely demise of Raul Julia.

Where Paramount’s Addams Family films were a big success, Warner Brother’s direct to video “Addams Family Reunion” (1998) fell short. Even with Tim Curry in the lead role as Gomez Addams and Darryl Hannah as Morticia, the perceived pilot to television’s “The New Addams Family” feels forced and falls far from the spirit of the other two films.

Musical Magic – Nathan Lane and Bebe Neuwirth delighted audiences with a Broadway reincarnation of the Addams Family in 2010. The boo-tifil macabre musical production told the story of Wednesday growing up and getting married. A national tour followed soon after the show closed at the end of 2011. An ill-fated pilot, with a new list of talent (including, oddly, Butch “Eddie Munster” Patrick as Pugsley), envisioned the Addams’ as a musical variety show (“Star Wars Holiday Special” meets the “Addams Family?”). Fortunately “The Addams Family Funhouse” failed to wow audiences in 1973. “Halloween with the New Addams Family” brought most of the original series cast in front of the cameras for a colorized creation in 1977. Additional family members join the story, including Pugsley Jr. and Wednesday Jr. as new siblings to the original Pugsley and Wednesday, as well as new brother to Gomez. Thieves almost ruin Halloween for the family but eventually learn that the Addams’ are not a family to tangle with.

Following the third live motion picture, “Addams Family Reunion,” another attempt to revive the television series (“The New Addams Family”) was made in 1988. John Astin assumed the role of an elder Addams – Grandpapa (grandfather to Gomez).  This cringeworthy modernization of the freaky family, fortunately, only lasted one season, but still managed to make more episodes than the original black and white series.

The kooky, creepy family initially found an animated afterlife in a 1972 Scooby Doo crossover (with several original cast members adding their voice to the well-received Hanna-Barbera cartoon feature). While the characters had their television voices, for the most part, appearances were geared more towards Charles Addams’ “New Yorker” cartoons.

1973 saw the arrival of an “Addams Family” animated series. The two-year cartoon seemed to pick up where the Scooby Doo movie left off, with the Addams’ returning to their RV. New voice talent joined the show, including Jodie Foster as Pugsley.  Characters continued to resemble their “New Yorker” origins.

A second series of creepy cool cartoons followed the success of silver screen Addams’. “The Addams Family: The Animated Series” brought the family back home and saw the return Astin as Gomez’s voice with new talent for the remaining cast. This cartoon continuation of the freaky fun family lasted for two years from 1992 -1993.

Tim Burton was set to produce a stop-motion animated movie based on Charles Addams’ original illustrations, but the project failed to launch.

Oscar Isaac (better known as Star Wars’ Poe Dameron) will soon be carrying the mantle for another Addams reboot.An animated adaptation, again based on Charles Addams’ single panel cartoon drawing of the family, is due in theaters October 2019. The revival is being written by Pamela Pettler (“Monster House,” “Corpse Bride”) and will be directed by Conrad Vernon (“Shrek 2,” “Sausage Party”).