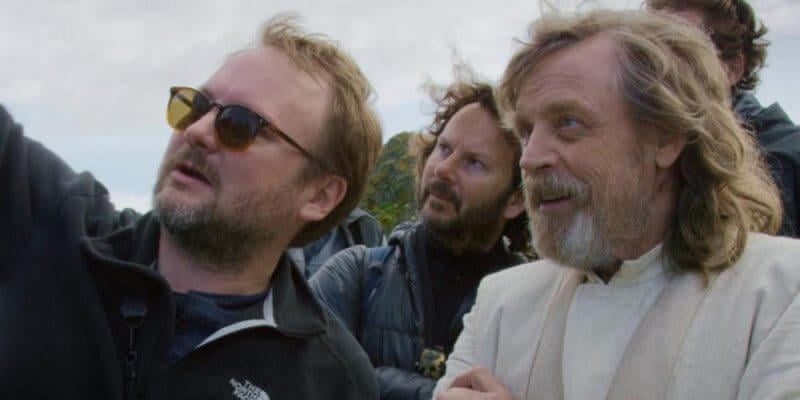 “Star Wars: The Last Jedi” isn’t just the most divisive Star Wars movie ever made– it’s also a strong contender for the most elaborate. And now that the hotly-debated Episode VIII is available on home video, Lucasfilm has provided fans with an outstanding feature-length peek behind the scenes at the staggering amount of work that went into bringing “The Last Jedi” to the big screen.

Director Rian Johnson had made a few impressive films and some iconic television before stepping into the Star Wars world (“Brick,” “Looper,” and “Breaking Bad” being the standouts among them), but one can tell how daunting he found his “Last Jedi” task just by the look on his face near the beginning of “The Director and the Jedi.” Years of planning, over three full months of production, and an immeasurable amount of pressure from fans– not to mention Disney– made this movie an intimidating responsibility for the forty-something filmmaker who grew up on the original trilogy.

WATCH “THE DIRECTOR AND THE JEDI” TRAILER:

In “The Director and the Jedi,” documentarian Anthony Wonke and his diligent crew captured the frenetic pace and immense scale of a contemporary Star Wars production. Attaching lavalier microphones to Johnson and other key members of the crew, Wonke was allowed unprecedented access throughout the entire filmmaking process, granting audiences a fly-on-the-wall insight into how thousands of people work together to create something as massive as “The Last Jedi” turned out to be.

Perhaps the most shocking moments in “The Director and the Jedi” come when we realize just how many of “The Last Jedi’s” jaw-dropping visual effects were accomplished via practical means. The Force-fueled explosion of Rey’s stone hut on Ahch-To? That was actually done on set, not on a computer. On a far smaller scale, even that little droid repairing Kylo Ren’s scar genuinely had physical, hyper-kinetic moving limbs in real life. From the colossal to the tiny, a shocking amount of what you see on screen in the final movie existed in real space during filming. That fascinating revelation aside, the heart of this documentary lies in the interaction between Rian Johnson and the team assigned to bring his vision to life. His relationships with the cast, his demeanor around other department heads, and his earnest desire to make the best new Star Wars movie possible will all have you rooting for him to succeed, even if you don’t agree it turned out that way. In reviewing the feature on this home video release, I found myself once again questioning a few of Johnson’s choices again, but “The Director and the Jedi” at the very least helped me understand the thought process that went into making them.

As someone who really enjoyed “Star Wars: The Last Jedi” (though I still hold that it is far from perfect), watching “The Director and the Jedi” felt like discovering the movie’s ideal companion piece. Like previous Star Wars behind-the-scenes documentaries “From Star Wars to Jedi” and “Empire of Dreams” before it, this captivating examination of Lucasfilm’s inner workings will give viewers a far more thorough understanding of the vast amount of effort it takes bringing Star Wars from the idea stage to fans around the world.

“The Director and the Jedi” is currently available as part of the “Star Wars: The Last Jedi” bonus features on Digital HD, Movies Anywhere, Blu-ray, and DVD.

Comments Off on REVIEW: “The Director and the Jedi” is an insightful, eye-opening look at how contemporary “Star Wars” movies get made