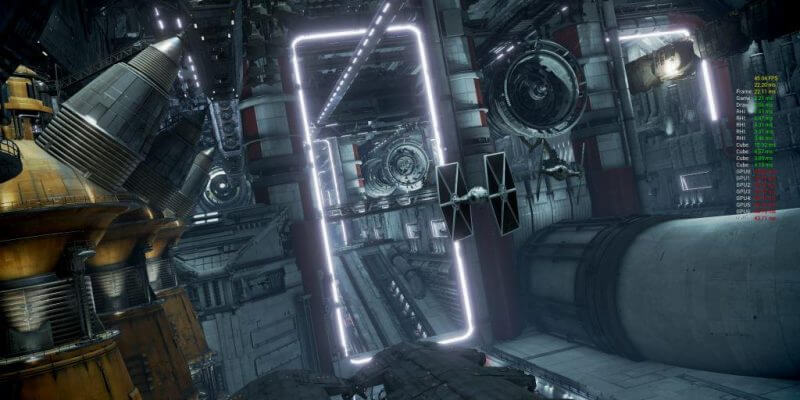 We’re just about a year away from the grand opening of the huge new Star Wars: Galaxy’s Edge area at Disneyland— to be followed by the same themed Star Wars land in Disney’s Hollywood Studios at Walt Disney World– and more details are slowly but steadily trickling in.

Today the technology firm NVIDIA revealed the very first in-ride image from the Star Wars: Galaxy’s Edge’s highly-anticipated Millennium Falcon flight simulator attraction, along with some new details about the tech that is going into the ride currently under construction on both coasts by Walt Disney Imagineering in cooperation with NVIDIA, Epic Games, and Lucasfilm’s immersive entertainment department ILMxLAB. When it launches, riders will enter a cockpit powered with a single BOXX chassis packed with eight high-end NVIDIA Quadro P6000 GPUs, connected via Quadro SLI.

Quadro Sync synchronizes five projectors for the creation of dazzling ultra-high resolution, perfectly timed displays to fully immerse the riders in the word of planet Batuu.

Working with NVIDIA and Epic Games, the Imagineering team created a custom multi-GPU implementation for Unreal Engine. This new code was returned to the Epic Games team and will help influence how multi-GPUs function for their engine.

If anything of that sounds like Greek to you, don’t worry: you’re not alone. The technological advances going into this sure-to-be-state-of-the-art attraction may be beyond the comprehension laymen like myself, but it’s nice to know Disney is taking out all the stops in putting Star Wars: Galaxy’s Edge together. I think fans would be very disappointed if this Millennium Falcon ride doesn’t turn out light years beyond what we’ve already experienced in existing simulator attractions like Star Tours.

Previous concept art of the Millennium Falcon attraction has depicted the ride as a cooperative adventure with a six-guest-at-a-time capacity per cockpit. Riders each take a post flipping switches and piloting the famous YT-1300 Corellian freighter, with the results of each flight affecting how guests are then treated by characters in the larger Star Wars: Galaxy’s Edge immersive environment. Walt Disney Imagineering’s Technology Studio Executive Bei Lang went on to further explain, ““We worked with NVIDIA engineers to use Quadro-specific features like Mosaic and cross-GPU reads to develop a renderer that had performance characteristics we needed. Using the eight connected GPUs allowed us to achieve performance unlike anything before.”