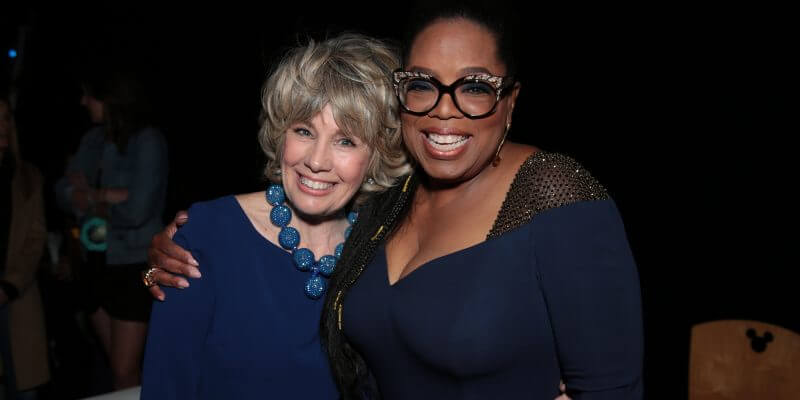 Producer Catherine Hand has exactly two IMDb credits to her name: Disney‘s “A Wrinkle in Time” and Disney’s “A Wrinkle in Time.” Yes, you read that right. Since her childhood, Hand has chased her lifelong dream of bringing American author Madeline L’Engle’s cherished science fantasy novel to life in a feature-length live-action movie, and as of this week she’s done so two times with the same company.

When I was offered the opportunity to interview Ms. Hand at the recent press junket for “A Wrinkle in Time” here in Los Angeles, I couldn’t help but address the elephant in the room: how does one approach adapting the same story twice, and why does she feel better about the way it turned out this time around?

Catherine Hand:  I first started this over three decades ago, trying to get the right team together. We did the TV version [in 2003]. I had always wanted it as a feature, and there were so many budget constraints with the TV version [and] lots of other problems. So when it was done, I just thought, “This is not the dream. This is not what I dreamt of doing when I was a little girl.” So I spent the next fifteen years getting it remade, and now this is the dream.

ITM:  The original novel came out in the 1960s. How did the new movie have to be shaped to fit more contemporary ideas and a modern approach to storytelling?

Hand:  Well that’s interesting, because there are some very universal themes that are timeless: the themes of love, and faith, hope, and courage, relationships with our fathers, our brother, our mothers. All of those things are timeless. There were some things when it came to language– if you read it as it was written in [1962] and [compare it to] how people talk and communicate today, it had to be updated but without losing the charm. It had to still be innocent, not cynical. We weren’t ever going to go down that path.

I think Jennifer Lee, when she wrote the script, she found this beautiful connection between the old-fashioned qualities in “A Wrinkle in Time” and bringing it into the 21st century. And then [director] Ava [DuVernay] brought a whole other layer doing the same thing. I think the changes that had to be made were to make it a better film: rearrange plot points, give different characters different motivations, flesh out the background of [the] father and mother. One of the reasons why the book endures is because you have to fill in an awful lot with your imagination. So now we had to make those choices for the screen.

ITM:  Speaking of Ava DuVernay, what made her the perfect choice to direct “A Wrinkle in Time”? What was your interaction with her like while creating the movie?

Hand:  You know how there’s this synchronicity, there’s just an energy in the air? There was a lot of chatter: “When will women directors make the leap from doing really successful independent features to big movies?” What other movie [would be more appropriate]? This is the heroine’s journey. A woman should be at the helm of this movie. So who of the women that are out there would be the right candidate? Ava was absolutely at the top of the list.

I had seen all of her films; I thought she did character beautifully. She would take a big idea and tell [it] through a very human story, and that is “A Wrinkle in Time.” There are a lot of big ideas in “A Wrinkle in Time,” but we experience them through this young girl, and so I thought [DuVernay] was just perfect [for that concept]. I was watching her when we were scouting locations, and she was just so smart. She would be saying things right before everybody was thinking them. She just articulated what everybody was thinking. I became so respectful of her and her talent, just [by] watching her.

ITM:  Some of my favorite children’s movies have very scary elements in them, as does “A Wrinkle in Time” near the end, which I definitely appreciated. How far is too far with that kind of thing?

Hand:  Have you seen “Sleeping Beauty” and “Snow White,” or even “Bambi” [when] the mother dies? [laughs] I saw “The Wizard of Oz” when I was eight years old, and I remember the very first time that witch came [on screen] I had to close my eyes I was so scared. But then I was so proud of myself to watch it a second time and not have to close my eyes. I think with “Wrinkle,” when you’re dealing with the evil brain, the energy force that is permeating throughout the universe, you’ve got to have a bad guy, a villain. We tried to find that line where young people will be challenged, but not so that they’d have nightmares. I think we have found that.

ITM:  Tell me a little bit about working with Disney, and how the company’s approach to the material benefited the movie.

Hand:  Again, it’s the synchronicity, but the creative team in place of Disney is pretty stellar from Alan Horn on down. Alan I had known when I first started this 37 years ago, he was the president of Norman Lear’s company. When I first wanted to go after the rights, I had to get Alan Horn’s approval. [And now] he is chairman of Disney [Studios].

But you’ve got this group of people that were so determined and dedicated to make the right version, the right adaptation of “A Wrinkle in Time.” When you have a studio behind you with that kind of commitment, nothing can stop you. Whenever Ava had an idea or she wanted to try something, the studio was 100% supportive of her. It makes a difference when you’ve got a studio the size of Disney and they are committed to you. You have a fighting chance of success.

ITM:  Speaking of success, there are four sequels to the original novel. If this movie is as big as everyone wants it to be, is there a chance that we could see another installment in the movie series?

Hand:  Please talk to Mr. Horn and tell him you think that should happen! [laughs] I think [as] always it depends on if the response to “Wrinkle” is one that’s really positive and we sell a lot of tickets. The first has to do well, then you can have a conversation about the second one.

ITM:  What are your thoughts on the cast? How much input did you have in selecting the right performers for these roles?

Hand:  As a producer, I was part of the whole conversation with [producer] Jim Whitaker, Ava, and the creative team at Disney– looking at all the video tapes, watching all the auditions. It is interesting with Storm [Reid] we all individually, separately thought she was the person that should play Meg. With all of [the cast members], they came in [and] it was an ongoing conversation. I loved working with them.

ITM:  With Disney movies lately, we see a lot of franchises, a lot of sequels and remakes. I’ve enjoyed most of them, but it’s a rare treat when we get something a little more original. Why is it important to keep blockbuster moviegoing fresh by bringing it different kinds of stories? It is a risk for Disney to stray from the path that works?

Hand:  [“A Wrinkle in Time”] is original, but it’s based on a beloved book [that has existed] for 56 years. The fact that the book was so beloved around the world absolutely gave it that necessary push to say, “Okay, let’s do this.” I think also Jennifer Lee’s love of the material pushed it because of “Frozen’s” success and her talent.

Yeah, of course it’s a risk, [but] I think there [are] some big franchise movies that are also risky. [laughs] They don’t always do well. With “Wrinkle” the themes were so powerful and the chance to do this [movie] with a young girl saving the universe, and then when Ava came along it [became] a biracial young girl, and a diverse cast– I think the risk was worth it. Sometimes you just take a leap of faith and you jump in and you find that courage. We hope that people love it.

ITM:  What was your reaction upon finally getting to see the finished film this time around?

Hand:  My first thought was, “Oh my god, it’s there!” [laughs] You have to understand, I come at this with a dream of 50 years. So every single stage of making this movie has been my favorite day. Every time I would see [an updated] cut [I would think] “Oh, it’s here.” And then of course you go, “These are things that we want to change. We want to tighten, we want to add.”

ITM:  And it turned out the way you wanted?

Hand:  Yeah, I think it’s beautiful. You know, moviemaking is a collaboration. So there are times when you go with somebody [else’s] decision, and then other times it’s yours. But at the end of the day, I think the film that Ava has made is absolutely my dream. Disney’s “A Wrinkle in Time” opens this Friday, March 9th in theaters nationwide.