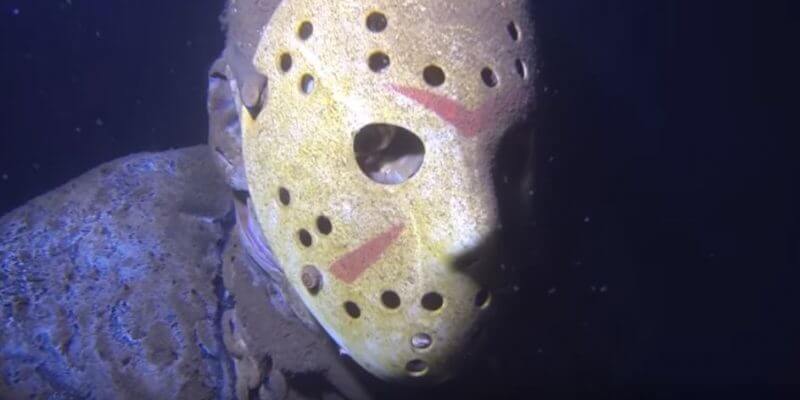 Imagine you are an avid diver. Now imagine that you’ve decided to explore the depths of a local dive spot in Crosby, MN.  During your dive, you encounter a horrific nightmare: Jason Voorhees!

Fear film “Friday the 13th” first slashed its way into theaters almost 40 years ago. Since then 12 more macabre movies, a television series, and comic books have added to the body count. Camping experiences, video games, and a devious diving encounter add to the slasher sensation.

Horror fans with a degree of diving skill can pay the seemingly immortal monster a visit if brave enough to descend the 120-foot depth. Those unfamiliar with the perfectly planted prank are in for a shock should they encounter the eerie effigy. Appearing as last seen at the end of “Friday the 13th Part VI: Jason Lives,” (anchored to the lakebed and in chains) this horror icon is very much real and calmly waiting for visiting divers. Complete with wide open, piercing eyes, the statuesque figure recreates Jason’s final moments of screen time from “Jason Lives.” This perfect paralyzing prank is the devious creepy creation of Curtis Lahr. Installed in 2013, the spooky statue still rests at the bottom of the lake. Since its splashdown, the life-sized slasher has been the subject of a few YouTube videos (as depicted above). First filmed in 2014 and again last year, Jason is still watching, waiting and accumulating a bit of algae over the years.

Ready to face the fearsome hockey-masked, machete carrying gaze of the iconic figure of fear?  You’ll need to make your way to the “old iron ore” pit lake in Crosby, Minnesota, otherwise known as “Camp Crystal Lake” (according to the two videos of deep water Jason). Have you ever pranked your friends with a life-size horror statue? Please share details of your devious deed(s) in the comments below.