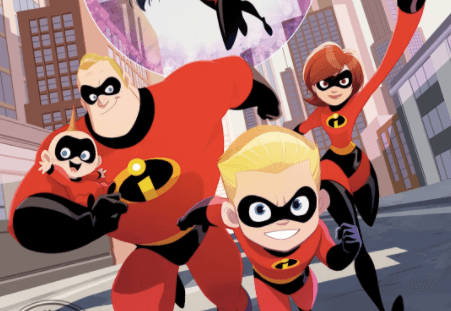 “Disney-Pixar’s Incredibles 2: Heroes at Home” is a graphic novel for all ages featuring Dash and Violet taking care of chores at home while their parents are busy with new jobs. During a trip to the grocery store, the superhero siblings detect criminal activity and their baby brother Jack-Jack causes chaos with his developing powers. “Heroes at Home” is written by Liz Marsham (Disney Princess Beginnings) and illustrated by Nicoletta Baldari (Star Wars: Forces of Destiny).

“Disney-Pixar’s Incredibles 2: Crisis in Mid-Life! & Other Stories” is a three-issue miniseries, with each issue containing two parallel stories. In “Crisis in Mid-Life!,” Mr. Incredible questions his powers while trying to stop the villain Bomb Voyage from ruining a submarine dedication ceremony. In “Bedtime Story,” Mr. Incredible tells Jack-Jack a heroic story that Dash and Violet have never heard before. Each issue also includes secondary stories about little Jack-Jack.

“Crisis in Mid-Life! & Other Stories” is written by Christos Gage and Landry Q. Walker and illustrated by Gurihiru, J.Bone, Andrea Greppi, and Roberta Zanotta. Here’s the cover for the first issue: Both “Incredibles 2” tie-in comics arrive in stores later this year.