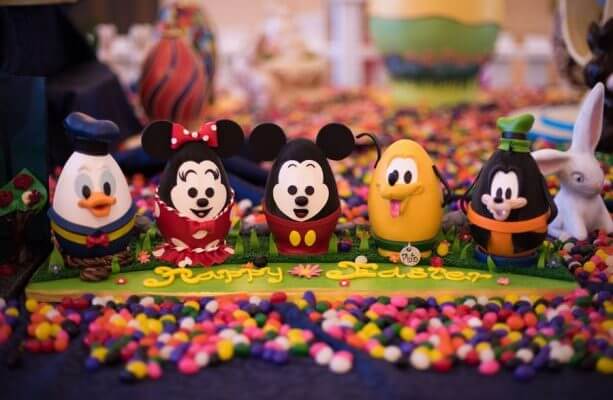 This Sunday is Easter and Walt Disney World has plenty of ways for guests to celebrate this egg-cellent holiday! Throughout the resort, guests will find some festive holiday displays and tasty Easter treats.

At Epcot, guests will find some delicious Easter cupcakes at both Fountain View and Sunshine Seasons. Fountain View’s cupcake will feature a marshmallow filling and is topped with buttercream icing and will be available March 30 – April 2. Sunshine Seasons’ cupcake will feature a fondant bunny with buttercream, cookies and cream crumble, and jelly beans all on top of a vanilla cupcake and will only be available on April 1. If that bunny cupcake isn’t for you, Disney’s Hollywood Studios will offer another option. At The Trolley Car Café, Rosie’s All-American Café, Fairfax Fare, and ABC Commissary guests will find another special cupcake that comes with raspberry filling and is topped with buttercream frosting and white chocolate bunny ears. This one will be available through April 2. Yet another option will be served up at Disney’s Animal Kingdom. This one will include a vanilla cupcake filled with key lime curd and topped with coconut buttercream and fondant eggs and will only be available April 1. Riverside’s Boatwright’s Dining Hall Easter Brunch will feature southern cuisine such as eggs benedict with crab, southern shrimp and grits, and Nashville hot chicken on a honey biscuit, as well as special Bloody Marys and Mimosas.

Yacht Club’s Ale & Compass Restaurant will offer a selection of all-you-can-eat items including assorted flatbreads, seasonal salads, and house-baked pastries and spreads as well as a choice of entrée with a specialty mimosa or non-alcoholic beverage.

If you already have plans for an Easter feast, you can still enjoy the holiday with the many Easter displays around Walt Disney World.

This year marks the 7th Annual Easter Egg Display at Disney’s Grand Floridian Resort. A stunning set of chocolate eggs will be on display in the resort lobby through April 9. Disney’s Animal Kingdom Lodge will feature a chocolate Easter egg display March 30–April 1. The display will include eggs inspired by “Up,” “Moana,” “Peter Pan,” and even the lodge itself.

In the first floor lobby of Disney’s Contemporary Resort, guests will find an array of decorative eggs inspired by some of Disney’s classic characters on display through April 4. Will you be celebrating Easter at Walt Disney World? Let us know in the comments below!