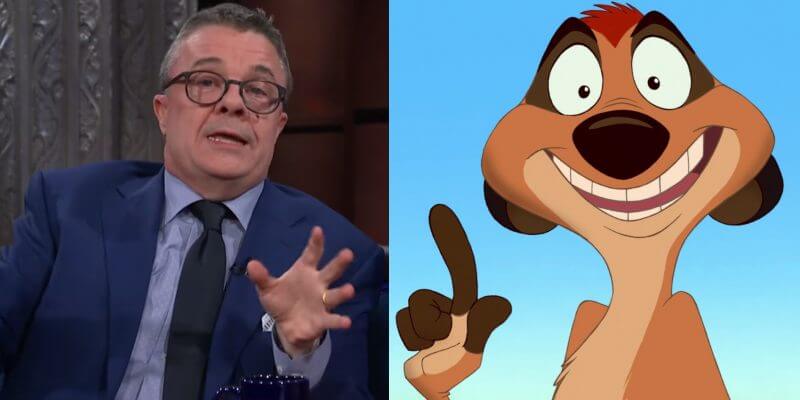 Disney’s 1994 animated classic “The Lion King” is full to the brim with iconic voice-over performances, but one of the most memorable has got to be Nathan Lane as the meerkat Timon. Together with Ernie Sabella as Pumbaa, Lane made “Hakuna Matata” a household phrase and gave Simba (Matthew Broderick) reliable pals for life.

Now that Disney is remaking “The Lion King” for the digital age under director Jon Favreau (“The Jungle Book” 2016), most of the original parts have been recast with more contemporary actors. Comedian Billy Eichner will take over the role of Timon, and apparently wrote Nathan Lane a nice note about following in his footsteps. On a recent appearance on “The Late Show with Stephen Colbert,” Lane read his hilarious response.

“How dare you! What’s next, you and Ryan Gosling in ‘The Birdcage’? I’d name another of my successful films, but I don’t have one. Billy, when this was first announced I thought to myself, this just goes to prove the old showbusiness adage, ‘Everyone is replaceable except James Earl Jones,” Lane wrote to Eichner (Jones is the only cast member reprising his role in the remake– as Simba’s father Mufasa.)

“Hakuna F*&%ing Matata,” Lane continued. “However, now that gay rights have come so far, in this version Timon can finally marry Pumbaa and live openly in the Serengeti. Believe me, once you’ve had warthog, you never go back.” Disney’s reimagined “The Lion King” is set for release on July 19th, 2019 in theaters nationwide.