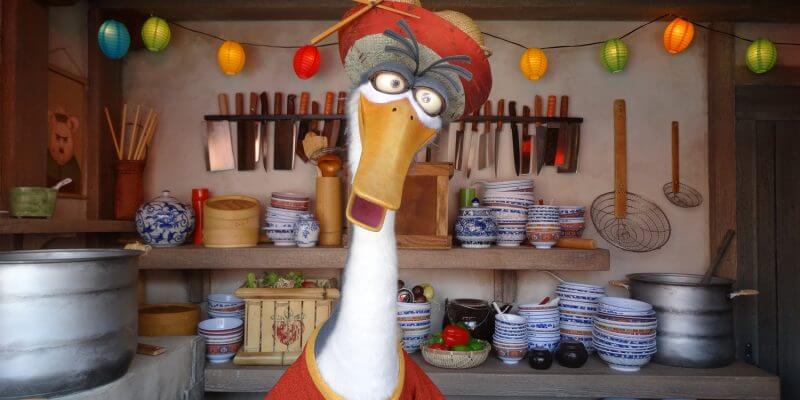 It’s time to celebrate the Year of the Dog at Universal Studios Hollywood, as the popular annual Lunar New Year event returns to the park bigger and better than ever! And this time around, Universal has expanded and amplified its “Kung Fu Panda” content with new live shows and character meet-and-greets, plus it has brought back returning favorites like Mandarin-speaking Megatron from “Transformers.”

Not only that, but those irresistible Minions from Illumination’s “Despicable Me” film series are getting in on the action this year, dressing up in traditional Chinese attire. Plus, Universal Plaza is decorated in bright red and gold for the occasion, with Chinese lanterns, plum blossom trees, and the all-new Jade Palace performance stage.


But the absolute highlight of Universal Studios Hollywood’s Lunar New Year 2018 event is the opportunity to meet Mr. Ping, the industrious noodle-shop owner who also serves as Po’s adoptive father in the “Kung Fu Panda” movies. Mr. Ping has been recreated as an interactive puppet for guests to meet, speak with, and have their photo taken alongside. It’s a wonderful experience that I hope sticks around or at the very least returns next year.


Children can also participate in “The Story of Lunar New Year,” a story-time activity for the younger members of visiting families.


Speaking of learning new skills, guests will be thrilled to find out how to draw characters from “Kung Fu Panda” with the help of Universal’s team of talented artists.


Universal Studios Hollywood has been holding its Lunar New Year event for several years now, but this is the first time it has felt fully fleshed-out to me. When I visited this morning I was genuinely impressed, and stayed longer than I had anticipated in order to catch everything I wanted to. The Mr. Ping meet-and-greet, especially, is a welcome addition and as I said above, I hope it finds its way into a more permanent place in the park.

For more information on Lunar New Year 2018 at Universal Studios Hollywood and for advance ticketing resources, be sure to visit the park’s official website.