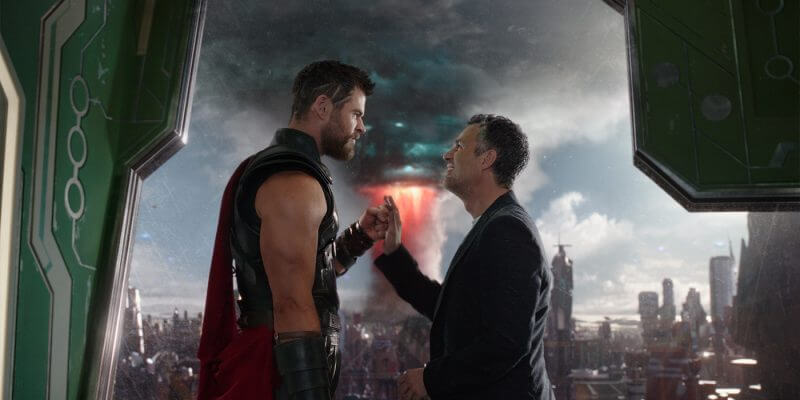 Much like my feelings on the current “Star Wars” renaissance at Lucasfilm, I like to think that individual entries in the Marvel Cinematic Universe (under the same parent company, Disney) can each have their own feel and tone, despite being part of a larger cohesive whole. With that in mind, I welcomed director Taika Waiti‘s brazenly humorous take on “Thor: Ragnarok” with open arms, and look back at it as one of the most fun experiences I’ve had in a movie theater in some time.

Now that Marvel Studios‘ “Thor: Ragnarok” is arriving on the home video market, we can take an even closer look at the precarious but playful adventures of Thor (Chris Hemsworth), Loki (Tom Hiddleston), Hulk (Mark Ruffalo), and Valkyrie (Tessa Thompson) as they face off against the evil Hela (Cate Blanchett) and come face-to-face with whimsical baddie Grandmaster (Jeff Goldblum) along the way.

The “Thor: Ragnarok” Blu-ray disc is presented in 1080p high definition widescreen preserving the 2.40:1 aspect ratio of the theatrical release. Audio options include English 7.1 DTS-HDMA, English 2.0 with descriptive audio, Spanish and French language 5.1 Dolby Digital tracks. English, Spanish, and French subtitles are provided and a DVD copy is included in the box, in addition to a Digital copy for play on Movies Anywhere. A 4K Ultra HD version is also available.

The movie itself is still a tremendous amount of fun, and Waititi’s carefree approach to the Marvel Universe almost feels as though it’s encouraging viewers to come and go as they please, a method that works wonders on home video. I watched the Blu-ray’s feature presentation of “Thor: Ragnarok” (for the third time, having seen it twice in theaters) in twenty-minute chunks, and like the MCU at large, it plays something like an extremely entertaining big-budget television series.

“Getting in Touch with Your Inner Thor”
“Unstoppable Women: Hela & Valkyrie”
“Finding Korg”
“Sakaar: On the Edge of the Known and Unknown”
“Journey Into Mystery”

Goofs, blunders, bloopers, bleeps, slips, and at least one accidental kick in the nether-regions.

Thor’s old roommate gets a surprise new cohabitant: Grandmaster, who takes the hapless Terran under his supervillainous wing.

MARVEL STUDIOS: THE FIRST TEN YEARS – THE EVOLUTION OF HEROES (5:23)

A look back at the first decade of the MCU, and a look forward at this summer’s highly-anticipated “Avengers: Infinity War.”

At the end of the day, you know whether you liked “Thor: Ragnarok” or not. I realize Waititi’s significantly lighter touch didn’t resonate with quite everyone, but if you enjoyed the movie as much as I did, you’re probably going to want to own it. And as far as physical media goes, I think Disney and Marvel Studios did a wonderful job putting together this home video release. Fans will get a kick out of the extras, and anyone who wants the ability to revisit the film at a whim will enjoy the return to a world of high-flying action, peppered generously with plenty of oddball laughs.

Marvel Studios’ “Thor: Ragnarok” will be available on Blu-ray and DVD from retailers beginning next Tuesday, March 6th.