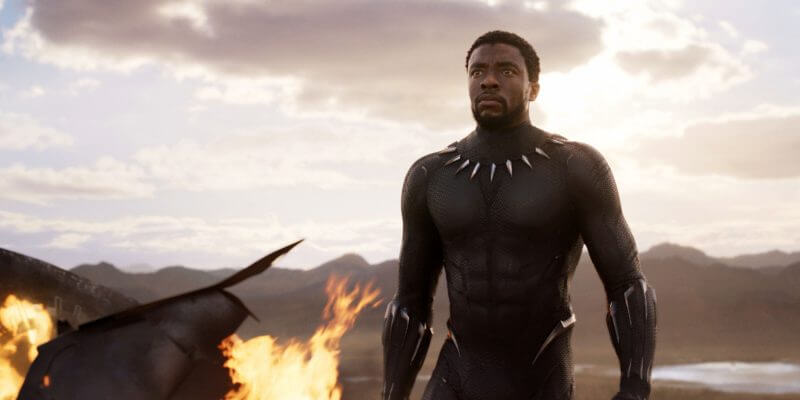 When Stan Lee and Jack Kirby created Black Panther for Marvel Comics in 1966, it must have felt like a line had been drawn in the proverbial sand. The character was the first African (or even African-American) superhero to appear in mainstream American comics, and he made his debut– in “Fantastic Four” issue #52– at a time of great civil upheaval.

“Black Panther,” the movie, is far from the first feature film to center around a black superhero– we’ve seen “Blade,” “Spawn,” “Hancock,” “Meteor Man,” “Blankman,” and even Shaquille O’Neal in “Steel”– but most previous examples feel like meta-commentary on the state of representation of people of color in popular culture. But Black Panther is the real deal. He isn’t presented as tongue-in-cheek, he’s not a drunk or a joke, and he commands respect both in the presence of his friends the Avengers and in his home nation of Wakanda. And his re-emergence as a cultural icon couldn’t be happening at a more appropriate time.

Wakanda, for the uninitiated, is a technologically hyper-advanced nation-state hidden in plain sight from the rest of the world. It’s citizens and government practice cultural isolationism, keeping their precious natural resource– the otherwordly energy-absorbing metal known as vibranium– entirely to themselves. That is, until a scheme to pilfer Wakanda’s vibranium stockpile and usurp its throne is set in motion by the nefarious Ulysses Klaue (AKA the supervillain Klaw, played menacingly by “Lord of the Rings” baddie Andy Serkis.)

Writer/director Ryan Coogler (“Creed,” “Fruitvale Station”) convincingly renders Wakanda as a melding of the traditional and the futuristic: bustling sidewalk marketplaces with high-speed monorail systems racing past overhead, for just one example. African history is honored here alongside adherence to established Marvel lore. But Coogler pays tribute to his hometown of Oakland, as well– this sweeping Eastern-hemisphere adventure both opens and closes in a Northern California basketball court.

Chadwick Boseman (previously best known for portraying baseball great Jackie Robinson in “42”) reprises his role as T’Challa from 2016’s “Captain America: Civil War,” who has taken up his father T’Chaka’s (John Kani) mantle as king of Wakanda and as the legendary hero Black Panther in the wake of the latter’s death.

The large ensemble supporting cast also shines throughout the film, with Shuri (Letitia Wright) and Okoye (Danai Gurira) as the badass girl-power standouts. Lupita Nyongo (“12 Years a Slave”) as Nakia is T’Challa’s love interest, but also the moral center of the story, and Michael B. Jordan– who worked with Coogler on “Creed” just a few years ago– entertainingly chews the scenery as the power-hungry Killmonger, the movie’s personification of what happens when authority gets placed into the wrong hands.


I won’t spoil what precisely it entails, but suffice it to say that the entire Killmonger plot, which serves as the driving force of the film for much of the back half, feels like a comment on the current state of American politics, with Jordan’s character serving as a stand-in for certain contemporary powers that be. That and a bordering-on-heavy-handed “build bridges, not walls” moral delivered aloud by the movie’s lead character indicate that Coogler and his co-writer Joe Robert Cole (“American Crime Story”) undeniably have something to say.

Aside from a few on-the-nose cliche story beats and one or two somewhat repetitive CGI-heavy action sequences, “Black Panther” feels fresh in a way that the Marvel Cinematic Universe hasn’t since the first volume of James Gunn’s “Guardians of the Galaxy.” It also feels like a self-sufficient part of the whole, fitting squarely within the MCU without relying too much on prior knowledge or setting up future installments (outside of the obligatory post-credits sequences, of course.) Coogler and his cast have created something wholly unique while standing on the shoulders of source material that has existed for over half a century.


“Black Panther,” like the property’s creators, makes the shouldn’t-be-audacious assumption that its audience will be comfortable watching a superhero adventure movie set mostly in Africa with a cast made up almost entirely of actors of African descent, but it also welcomes the rest of the world to join in on the fun.

This film is a departure from the Marvel formula that dips back into that formula just often enough to help its viewers feel at home. And once the audience feels at home in the world of Wakanda, I can say based on experience that they won’t want to leave.