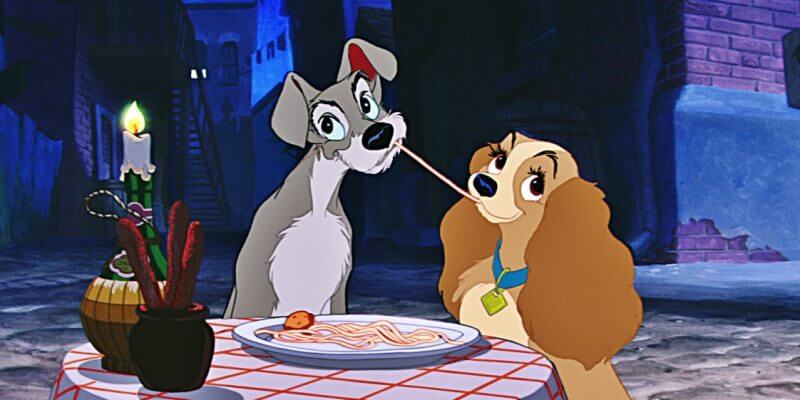 In June of 1955– just one month before Disneyland first opened its gates to the public– Walt Disney‘s fifteenth animated feature film was released into theaters. “Lady and the Tramp” was an instant smash success, and is remembered today among the 20th century’s greatest accomplishments in American animation.

Now “Lady and the Tramp” has arrived on Blu-ray (for the second time) as part of the new Walt Disney Signature Collection with fresh bonus features and an absolutely gorgeous 1080p HD transfer, preserving the movie’s original 2.55:1 CinemaScope widescreen aspect ratio.

I received a copy of the “Lady and the Tramp” Walt Disney Signature Collection Blu-ray release for review, and I can say that the movie itself both looks and sounds wonderful. The colors pop, the lines are sharp, and the 7.1 DTS sound surrounds you in top quality with the unmistakable songs and voices from this classic Disney film.

The main attraction (with a running time of 1:15:52) is available to watch in three different modes: the Original Theatrical Version, a Sing-Along Version with convenient lyrics popping up under the image whenever a song begins to play, and the terrific Walt’s Story Meetings audio commentary. The latter re-creates developmental chats between Disney and his animation team using actors reading actual transcripts of the real-life creative talent that first put this movie together. It’s a fascinating aural exploration of the surprisingly vast amount of input Walt himself contributed to “Lady and the Tramp.” BONUS FEATURES
“Walt & His Dogs” (8:27)
A featurette about Disney’s lifelong love of canines, which includes archival audio interview recordings over material from the Walt Disney Family Museum in San Francisco.
“Stories from Walt’s Office” (6:02)
An interesting piece exploring how Walt Disney’s office on the Disney Studios lot in Burbank was reassembled and redecorated with his old belongings after several decades.

“How to Make a Meatball and Other Fun Facts About ‘Lady and the Tramp'” (9:06)
Oh My Disney’s Alexys Gabrielle and YouTube chef Amber Kelley teach viewers how to create the most famous Italian dish from the movie, in between revealing hidden secrets and Easter Eggs from the animated classic.
Song Selection – “Peace on Earth” / “What is a Baby / La La Lu” / “The Siamese Cat Song” / “Bella Notte” / “He’s a Tramp” (9:59)
Isolated songs with sing-along lyrics, for quick access to these jaunty tunes.
“Diane Disney Miller: Remembering Dad” (7:51)
Walt Disney’s daughter visits his apartment above the Main Street Fire Station in Disneyland and reminisces about the early days of visiting the park with her father and her children.
Deleted Scenes – “Introduction of Boris” / “Waiting for Baby” / “Dog Show” (19:11)
Using early storyboard drawings and newly-recorded actors’ voices, Disney has assembles several scenes that were planned for “Lady and the Tramp” but didn’t quite make the cut for one reason or another.
Never-Recorded Song – “I’m Free as the Breeze” (1:26)
Another deleted scene, but this time with the added bonus of a deleted song!
Classic Bonus Preview (0:48)
Detailing the additional content available on the digital-only release of “Lady and the Tramp.” Overall, the “Lady and the Tramp” Walt Disney Signature Collection Blu-ray feels like the definitive release of this beloved film in the 1080p standard (until the movie is reissued in 4K at some point down the line.) The feature presentation is top-notch and most of the bonus features range from welcome to indispensable.

This Blu-ray edition is the perfect way to preserve “Lady and the Tramp” in your home video collection for the foreseeable future. It will be available from retailers on Tuesday, February 27.