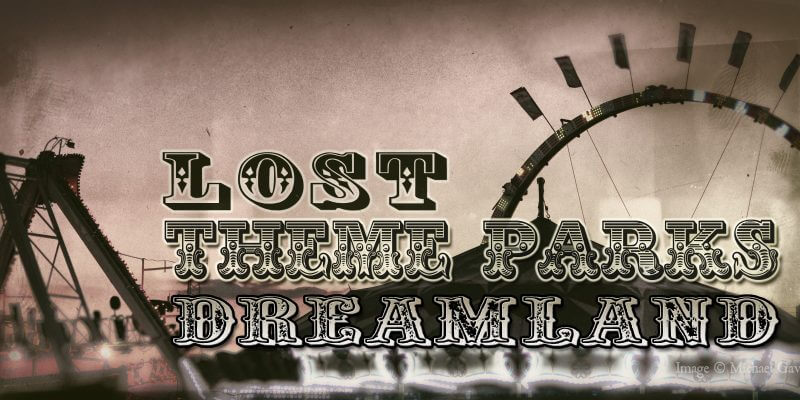 Long before The Oriental Land Company opened shop in Japan, the city of Nara was home to a large Disneyland-like park called Dreamland.

Dreamland enjoyed a 45 year long tenure before it closed in 2006.  As it was another ten years before the structures were demolished, the abandoned park was a popular place for urban explorers.

The park planned by Kunizu Matsuo was supposed to be the stuff dreams were made of.  Inspired by a visit to Disneyland, Matsuo approached Walt Disney and had hoped to replicate Disneyland in Japan.  Construction commenced but the two could not come to an agreement on licensing fees and the Disney part of the new theme park was abandoned, but not before most of the construction was completed. Thus, in the summer of 1961, without the aid of Mickey Mouse and his pals, Dreamland opened to the public.  Ran-chan and Dori-chan replaced the famous mouse as mascots.  Dreamland enjoyed a steady stream of tourists, averaging over one and a half million visitors annually.

Because the new theme park was originally planned to be a new Disneyland, resemblances to the Anaheim Park were unavoidable.  Dreamland visitors entered onto Main Street after crossing underneath the train station.  At the end of Main Street, at the hub, arose a castle that could easily be mistaken for Cinderella’s castle.  Similarly, a submarine ride, sky ride, monorail ride, bobsled ride (through which the sky ride passed) tea cup ride, and race car attraction seemed to mirror their California inspiration. In addition to the Disneyland inspired attractions, Dreamland offered entertainment by way of several roller coasters, a dark shooting ride, a carousel, and a log flume attraction. Dreamland’s attendance sustained the park until a few new amusement operators set up shop about six hours to the northwest.  Though 300 miles separated Nara from the newly opened Tokyo Disneyland in 1983, the new Disney property spelled the beginning of the end for Dreamland. Disney’s second gate, which opened eight years later, caused Dreamland attendance to significantly decline. Osaka, just 25 miles away from Nara, became the home to Universal Studios Japan (2001) the same year as DisneySea.  With three major theme parks drawing guests away from Dreamland, evidence of its impending closure could be clearly seen as the park’s appearance began to take a turn for the worse.

After 45 years of operation, Nara’s Dreamland closed its gates on August 31, 2006.  In the following ten years after the theme park was abandoned, it became the dream destination of urban explorers who were attracted by rumors of hauntings and the dystopian appearance of still standing, but abandoned, overgrown sprawling collection of rusting rides and crumbling facades. Dreamland was laid to rest at the end of 2016, when rides and buildings were finally demolished.