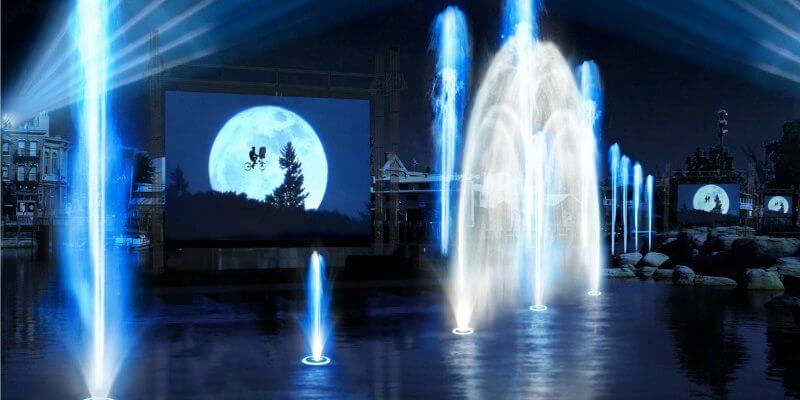 In the center of Universal Studios Florida rests a long lagoon.  Guests visiting this movie-themed playground find a trip traversing the entire park requires a walk around this prominent body of water.  Since 1991, when Universal Orlando opened its doors, “Dynamite Nights Stunt Spectacular,” “Universal 360: A Cinesphere Spectacular” and “Universal’s Cinematic Spectacular: 100 Years of Movie Magic” performances have entertained guests using this lagoon as a stage for this trio of exciting experiences.

As a new experience will soon be arriving at the lengthy lagoon, a look back at the first three shows is in order. This “Miami Vice” themed pyrotechnic heavy stunt show was one of Universal Studios Florida’s original entertainment experiences.  The water-based show opened on June 7, 1990, the same year as the theme park. Twenty minutes of boat chases, gunfights, and explosions were set to music from the popular television series. Later recordings of the show suggest that the “Miami Vice” inspired action and narration were dropped for a generic, good guys vs. bad guys, adventure. “Dynamite Nights Stunt Spectacular” dazzled guests until 2000, when the show was discontinued.

The lagoon would not see another show for six more years.

A component to nightly fireworks, this 15-minute movie magic adventure appeared on large globes across the lagoon.  Enhanced with water effects, lasers and tied to the Studios’ fireworks performance, “Universal 360: A Cinesphere Spectacular” featured memorable moments from classic Universal movies (“Jurassic Park,” “E.T. The Extra-Terrestrial,” “Jaws,” “Back to the Future,” and “Apollo 13”). John Landis directed the production and Brad Kelley directed the music. These magical movie moments were simultaneously shown on four large, inflatable spheres in the center of the lagoon. A reference to the lagoon’s former stunt show was included in the film clips. “Universal 360: A Cinesphere Spectacular” was shown during peak seasons and special park events through September 2011.

Details of the new show arriving on the lagoon in the center of Universal Studios Orlando have yet to be revealed.  Stay tuned to ITM for details once Universal Studios Theme Parks reveals what they have in store.