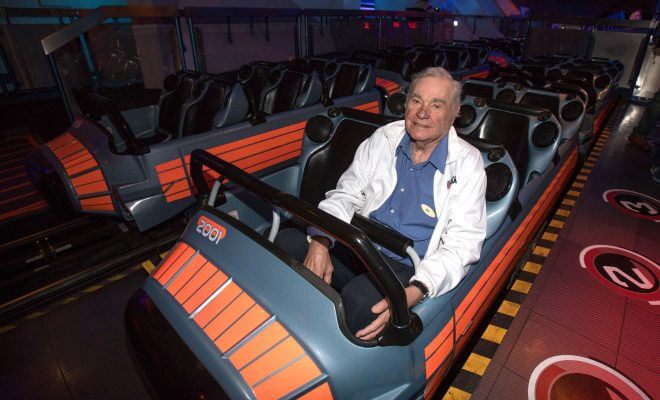 87-year-old Bill Watkins did something very special just over 40 years ago. He designed Disneyland’s Space Mountain, one of the most iconic and popular attractions in the history of Disney and all other theme parks.

In 1977, Watkins, then a Disney Imagineer, took the very first ride on Disneyland’s Space Mountain. Yesterday, before the park opened to the public, he took what he says will likely be his last.

Watkins recently met 29-year-old Kyle King, who had learned that Watkins hadn’t ridden Space Mountain since 2005 and asked him if he would be interested in riding it again. When Watkins said he would, King contacted Disneyland and yesterday the park opened early just for them.

The attraction’s staff turned the lights on before Watkins and King rode it, allowing Watkins to admire his work.

When the ride had finished, Watkins asked one simple, yet very moving, question:

The staff turned the lights off for Watkins and King to take one more ride, as the attraction was meant to be enjoyed.

Watkins acknowledged the thought that he will likely not be riding Space Mountain again, bidding a fond farewell to his masterpiece that millions have adored over the past 41 years.

“This will probably be my last ride,” Watkins said. “I suppose it’s goodbye.”