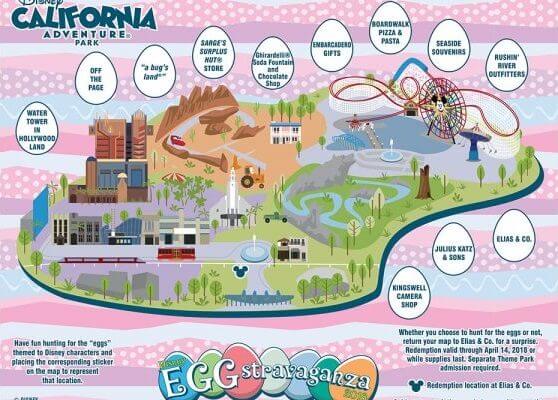 As in years past, the colorful Egg-stravaganza maps will be available for purchase– for $5.99 plus tax– around the resorts, to be used as guides for families to track down the strategically hidden Easter Eggs above buildings, in flower gardens, in stores, and outside rides and restaurants. Then the map can be stamped (with or without having completed the hunt) to receive a special prize for no additional charge.

We participated in Disneyland Resort’s Egg-stravaganza a couple years ago and it was certainly a lot of fun, but probably best suited for younger guests visiting during the Easter season.

According to today’s announcement from Disney, maps can be purchased at “Elias & Co. at Disney California Adventure park; Disney Showcase in Disneyland park; World of Disney Store in the Downtown Disney District” beginning March 16th and running through April 1st at Disneyland Resort in Anaheim, California.

Comments Off on Easter Egg-stravaganza hunt will return to Disneyland Resort in March, just in time for spring