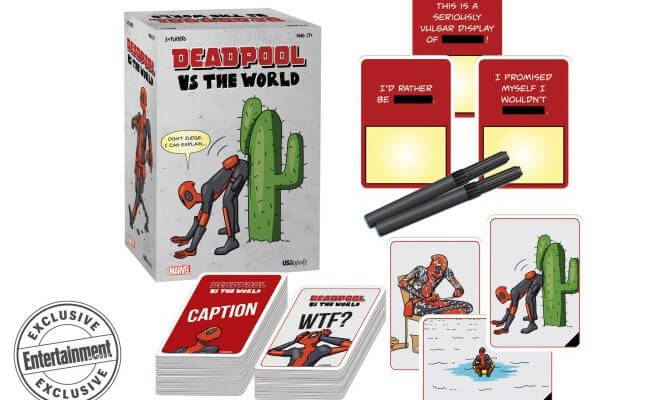 Over the last year few years, Deadpool has quickly climbed the ranks in terms of superhero popularity. The Merc with a mouth has been featured in his very own movies, video games and soon, a Cards Against Humanity-inspired adult card game.

A preview of the new game was recently shared by Entertainment Weekly, including a look at some of the playing cards. Players have to use the caption cards in their hand, filling in the blanks to complete the wittiest caption to go along with the image on the “WTF” card.

“Winning requires players to tread outside of their comfort zone and fill in the blanks of cards that elicit inappropriate responses, ensuring outcomes of surprise, shock, and outbursts of laughter,” game publisher USAopoly explains.

“Deadpool vs The World” will be available this summer and will sell for $24.95.