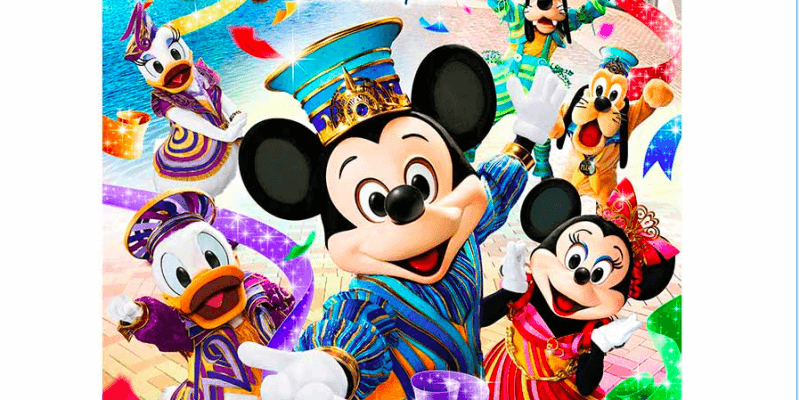 Tokyo Disneyland opened its doors on April 15, 1983, and the park plans to honor the occasion with a year of the “Happiest Celebration!”.

From April 15, 2018 – March 25, 2019, both Tokyo Disneyland and Tokyo DisneySea are decorated for the 35th-anniversary festivities. At Tokyo Disneyland, World Bazaar is transformed into Celebration Street. Guests can also look forward to a new daytime parade, “Dreaming Up!,” and the new nighttime spectacle “Celebrate! Tokyo Disneyland” at Cinderella Castle. At Theatre Orleans, join Donald Duck, Jose Carioca, Mickey Mouse and friends during “Let’s Party Gras.” Also, be sure to visit the newly reopened “it’s a small world” to see dozens of new figures based on characters from Disney movies. At Tokyo DisneySea, take part in the “Happiest Celebration on the Sea,” a new water show starring Mickey, Duffy, and friends. Be transported to the Big Apple with “Hello, New York!,” a new show at Dockside Stage. Then, make a stop at the Village Greeting Place to meet Duffy and ShellieMay in their new costumes.

Across both parks, look for the Happiest Mickey Spots, which include 35 special Mickey statues perfect for snapping a commemorative photo. Special anniversary-themed food and snacks are also available, such as anniversary churros. In addition, the Pastry Palace at Tokyo Disneyland features the fan-favorite Chocolate Crunch snack.